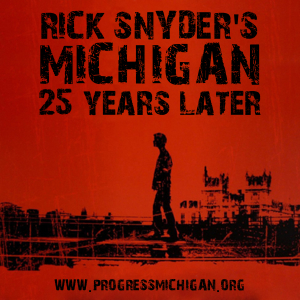 Are you one of the many Michiganders looking for steady work? Well, Rick Snyder has the job for you! The catch? You’ll have to hold your horses for the next 25 years. In the meantime, you and your kids can survive on broken promises and empty rhetoric.

Talking to the 2013 Mackinac Policy Conference, Gov. Snyder suggested an interesting thought experiment: “if you want a really sweet job, run for governor in 2038.” For Michigan’s sake, let’s ignore Snyder’s implicit argument – that he shouldn’t be held accountable for his policies until 2038 – and imagine what effects eight (8) of his current policies would have in 25 years.

Gov. Snyder has spent two years making a lot of promises to Michiganders, but his $2.5 billion in corporate tax cuts have failed to create more and better jobs. In fact, Michigan’s unemployment rate is still higher than it was during Jennifer Granholm’s first term.

Last week, as Gov. Snyder was fundraising with Jeb Bush and rubbing elbows with Michelle Rhee at the 2013 Mackinac Policy Conference, PulteGroup announced they were leaving Michigan for greener pastures – and taking 300 jobs with them. One not-so Tough Nerd’s response? “I have to respect that.”

Our per capita debt burden has increased, more children are living in poverty, and our personal income is barely keeping up with inflation. It’s no surprise that forty percent of our college graduates are leaving Michigan (mostly to non-RTW states).

In short: they’re fewer in number and pay bottom dollar. You just have to respect that.

While a few moderate Republicans have called on Dave Agema to step down, elected officials and party leaders like Gov. Snyder, Speaker Bolger and Senate Majority Leader Randy Richardville have refused to get involved, with Snyder saying he didn’t want to “get in the middle of all that.”

In a meeting with the Detroit Free Press editorial board, Speaker Bolger claimed to “completely oppose” Agema’s comments, but refused to call on him to resign. Sen. Richardville took it a half-step further, saying that Dave Agema’s comments don’t speak for himself or the Republican caucus, all while refusing to call on him to resign. Needless to say, Dave Agema’s resolution was unanimously passed and his position confirmed.

If you’ve been following the travails of the for-profit charter school cottage industry in Michigan, you know you really will have to “shop around” for a quality education. Because of the perverse incentives of a market where there is little oversight, guaranteed demand, and the overriding corporate prerogative to meet quarterly projections, Michigan’s for-profit charter school utopia has failed. Simply put: why invest in providing a quality education when you can focus on advertising, count more “heads,” and beat market expectations?

Beyond a public education, while Michigan’s funding for higher education has steadily decreased over the last three decades, the costs associated with it have increased:

How is it that Michigan Democrats garnered 200,000+ more votes than the MIGOP, but Republicans still retained their majority in the state House (and U.S. House) and Senate? Simple: After the 2010 census, they gerrymandered Michigan’s (and 22 other state’s) districts to solidify their advantage among reliable partisan voters. Based on a database of voter histories, Michigan Republicans redrew the state House and Senate district boundaries – and Congressional Districts – to favor their own party. Now, they want to award electoral votes based on who wins more votes in the districts they drew.

Under this plan, while Romney lost Michigan by nine points he would have won more electoral votes.

5. Core functions of government are privatized.

So how’d it turn out? Not well:

When Geo ran the Michigan Youth Correctional Facility in Baldwin, the Legislature’s independent auditor concluded that the so-called “punk prison,” ranked as one of Michigan’s most inefficient and costly institutions. It also had far more violent incidents than other maximum-security prisons. The state ended the contract in 2005.

Much like Michigan’s failed for-profit charter school utopia. In spite of Michigan’s failed experiments in prison and education privatization, conservatives still cling to it as the solution to all of life’s ills.

6. Public policy will be decided behind closed doors, your entry to Michigan’s Capitol will be blockaded by MSP, and Speaker Jase Bolger will still be allowed to do whatever he wants.

Unlike President Obama’s “scandals,” the improprieties happening on Snyder’s watch are verified by actual facts. So, we’re just going to list them as bullet points:

Because Republicans only believe in “small government” when it doesn’t involve vaginas or poor people, Republican lawmakers in Lansing passed a bill that institutes suspicion-based drug screening for welfare recipients. You’d almost think they believe being poor is a crime, so they should treat poor people like criminals.

Florida tried this, and it ended up costing more than it saved. Why? Because it’s a stupid idea and sets a dangerous precedent for future policies.

8. Not wearing a helmet is a lot like not buckling your seatbelt: dangerous.

This doesn’t even require an explanation. Special interests won over Gov. Snyder and we’re paying the price:

Bottom line: Wearing a helmet may be uncomfortable, but it’s good for your health and your wallet. Not to mention your neighbor’s wallet.