You just have to respect that 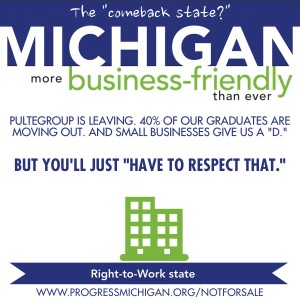 In 2010, Gov. Snyder presented himself as a no-nonsense businessman who would move us beyond the partisan gridlock that had gripped Michigan with simple, fair, and efficient solutions. He even promised, “As Governor, I will ensure that government is open, fair and accountable to the citizens by making Michigan a national leader in transparency and ethics.”

As it turns out, Rick Snyder is just another politician.

After claiming so-called right-to-work wasn’t on his agenda, Gov. Snyder and Lansing politicians rammed it through with zero public input or debate. Shortly thereafter, Snyder re-appropriated Pure Michigan to suit his partisan agenda and dirtied the brand in the process; using 144,000 of your tax dollars to promote it in the Wall Street Journal. The Michigan Economic Development Corporation (MEDC) went so far as to claim Michigan is “more business-friendly than ever.” When asked to support their claim with facts, all they could muster was: “Michigan was not a welcoming place.”

And seemingly… it still isn’t.

Last week, as Gov. Snyder was fundraising with Jeb Bush and rubbing elbows with Michelle Rhee at the 2013 Mackinac Policy Conference, PulteGroup announced they were leaving Michigan for greener pastures – and taking 300 jobs with them. One not-so Tough Nerd’s response? “I have to respect that.”

Our per capita debt burden has increased, more children are living in poverty, and our personal income is barely keeping up with inflation. It’s no surprise that forty percent of our college graduates are leaving Michigan (mostly to non-RTW states).

But that’s the cost of doing business… and you just have to respect that. Help us tell the far-right that we’re not customers, and Michigan is not for sale.