4 things Gov. Snyder would rather do than lead 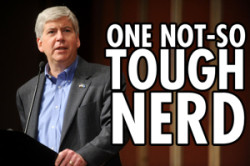 Elected officials are accountable to those they represent. In 2010, Gov. Snyder presented himself as a no nonsense businessman who would move us beyond the partisan gridlock that had gripped Michigan with simple, fair, and efficient solutions that would benefit the common good. The nerd in him demanded concrete goals and graphs so that we could track his progress. At the outset, Gov. Snyder did something few modern politicians do: he gave us a way to hold him accountable. We call this leadership.

But that was the beginning – and the end – of One Tough Nerd. Gone are the days of dashboards and data-points. Now, he’ll only answer questions that have nothing to do with the jobs he promised or Dave Agema. As it turns out, Rick Snyder is just another politician. So, here are four things Gov. Snyder would rather do than lead:

1. Sit on the sidelines rather than call on Dave Agema to resign and risk angering the bigoted far-right power brokers in the Republican party.

It’s been nearly two weeks since RNC Committeeman Dave Agema posted his antigay screed on Facebook, and while a few attention seeking Republicans have called on Dave Agema to resign, so-called Republican leaders have remained deafeningly silent, including Michigan’s One not-so Tough Nerd Rick Snyder, saying “I’m not going to get in the middle of all of that.”

2. Focus on dredging rather than come out in support of equal rights for LGBT Michiganders.

A day or two after the Dave Agema story broke, Gov. Snyder was again tap dancing around the issue, saying “That’s not a topic I would spend a lot of time on as a practical matter because, in particular in Michigan, it’s in Michigan’s constitution. So I view it as I’m here to follow through on the laws of the state of Michigan. It was decided some years ago in Michigan.” He went on to say, “So it’s an issue that’s decided, so I simply say, ‘Well, I’ve read Michigan’s constitution, this is what it says, I’m going to go work on dredging.'”

Gov. Snyder rode into office in 2010 on a white horse with a mind for business. He was simple, fair, and efficient. He would bring a nerd’s scrutiny to the office of governor and in the process help fix Michigan’s budget woes and economic malaise. He would get Michigan past the culture wars of yesteryear and focus on what matters: jobs. Integral to achieving this goal was passing so-called right-to-work. To convince Michiganders this was the right thing to do, he tossed out that Indiana had created 43,000 jobs after they passed right-to-work. But when asked if right-to-work is creating jobs in Michigan, Gov. Snyder says what amounts to, “We don’t know and I can’t tell you.” So instead of leading, Gov. Snyder says it’s impossible to know. Doesn’t sound like any nerd I know.

4. Instead of providing evidence that supports the Michigan Economic Development Corp’s claims about right-to-work, they’d just as soon ignore the question entirely.

Initially, right-to-work wasn’t on Snyder’s agenda… then the actual leaders of Michigan’s Republican Party told him it was, and that he would sign it. So they locked down the Capitol, exempted police and lined them up around the Capitol in a show of force, and rammed through right-to-work without any public input or debate. Shortly thereafter, the MEDC decided it would be fantastic to spend 144,000 of your dollars to promote a partisan issue and dirty the Pure Michigan brand in the process. On the MEDC’s Michigan Advantage website, they claim right-to-work will provide “greater efficiency and higher potential profits while partnering with a world-class workforce free to decide whether union membership is right for them.” Because nothing says Pure Michigan like higher corporate profits at the expense of Michiganders’ wages. Michiganders love being paid less. When asked to provide evidence to support their claim, they declined to do so, saying only that “Michigan was not a welcoming place.”