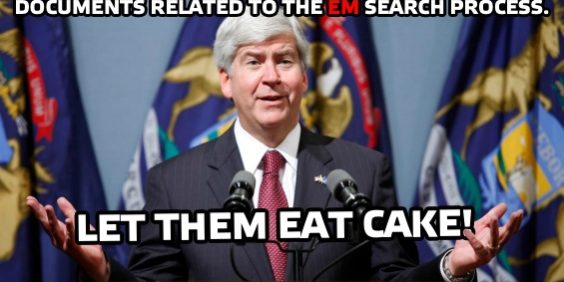 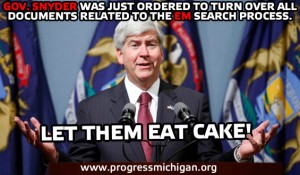 Today, Judge William Collette ordered Gov. Snyder and a DC-based law firm to hand over all documents related to the hiring of Detroit Emergency Manager Kevyn Orr. Richard Baird, a contractor paid $100,000 through a private fund supported by secret donors, is even claiming Executive Privilege protections extend to his correspondence with the Snyder administration:

Baird, who is not a state employee or appointee but a contractor paid $100,000 a year from a Snyder nonprofit corporation funded by donations, had claimed executive privilege in refusing to give evidence or provide e-mails related to 20 candidates he said were in the running for the Detroit emergency manager job.

Riding into office on a white horse, Gov. Snyder proclaimed “As Governor, I will ensure that government is open, fair and accountable to the citizens by making Michigan a national leader in transparency and ethics.”

As Judge Collette reasoned: “He is a private citizen trying to be under the umbrella of government. The Governor wants it both ways here.”

You see, Gov. Snyder thinks he can have his cake and eat it, too. Did you really think he meant all of government? Like Queen Marie Antoinette before him (or maybe Rousseau), Governor Snyder’s response to a judge’s order betrays a sense of entitlement and the belief that the rules don’t apply to him.

And because so-called “executive privilege” doesn’t exist in Michigan law, Rich Baird’s lawyer referred his lawyer back to the time when Richard Nixon claimed it – seriously!

It’s kinda like the magical invincibility shield you activated when you were a kid, but instead of affecting the outcome of a children’s game it prevents Michiganders from holding their Governor – and government – accountable.

I don’t know about you, but that doesn’t sound like good customer service to me.