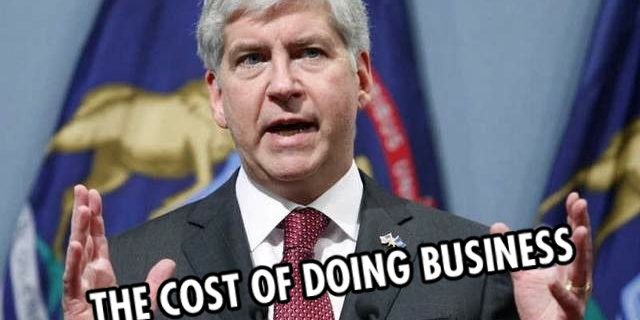 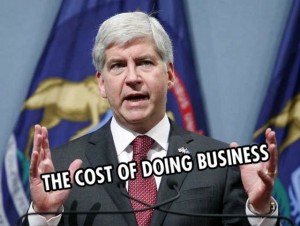 According to Gov. Snyder, Michigan is a business, and we’re all his customers. Like most companies, Gov. Snyder’s stockholders are looking to make good on their investment. How? It’s pretty straightforward: privatize core functions of government and create more customers.

More customers means more money; and Michigan has nearly 10 million potential customers. A few million are already up for grabs: Michigan has the highest number of for-profit charter schools in the nation, and our justice system is next – again.

We tried privatizing prisons in 1999, but that failed. We’re trying for-profit schools, and they’re failing as we speak. But unlike a traditional market where companies offering sub-par services or products would lose out, they prosper.

Take the case of Cody Bailey. He’s the 22 year-old president of Taylor Preparatory High School, which is run by the Grand Rapids based for-profit charter school company PrepNet:

America is indeed a miraculous place. People will actually send their high school-aged kids to a for-profit school run by a 22-year old with no experience in much of anything, much less education. (At one point, their webpage mentioned all kids getting a free laptop. That enticement appears to be gone now.)

See, it’s cheaper to pay for slick advertising than provide a quality education. Why make the investment when you can focus on ads, count more “heads,” and make a nice profit? Then, take a portion of that profit and put it towards more advertising. Meanwhile, schools that do invest in providing a good education lose students, funding and eventually have to shut their doors.

Likewise, it’s cheaper to pack 20 people in a cell than 2. Who’s going to raise a fuss about “criminals” being treated poorly? No one. So they house them in cramped quarters with poor oversight and serve them the cheapest food possible. Then, private prison operators use that profit lobbying lawmakers to keep existing laws and their stringent sentencing guidelines on the books. That’s why we imprison more people per 100,000 than any other country on earth, and spend more on it than any other country on earth.

And for Gov. Snyder’s stockholders, business is booming. Help us tell the far-right that we’re not customers, and Michigan is not for sale.