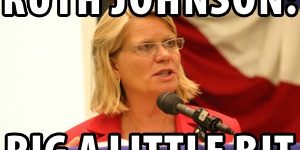 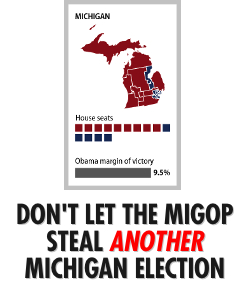 Republicans are hurting. Their policies are unpopular and they keep losing elections. But rather than change, Republicans decided it would be easier to rig Michigan’s elections in their favor.

Remember how Lansing Republicans gerrymandered Michigan’s congressional districts in 2010? Well, under the new GOP scheme presidential candidates would get one electoral vote for each congressional district they won. But since it’s hard to sell their plan to rig an election in the name of “fairness,” Secretary of State Ruth Johnson is out with a new “hybrid” scheme, which only seeks to rig Michigan’s elections a little bit.

Under the GOP’s new “hybrid” system, some electoral votes will be awarded by our current “winner takes all” system, and the rest will be allocated based on who gets more votes in the districts they gerrymandered.

This is the same as trying to make your bat bigger because your fans keep complaining that you’re losing.

If this ALEC-inspired electoral rigging scheme had been in place in 2012, Mitt Romney would’ve “won” more electoral votes in Michigan than President Obama – even though he lost by nine points.

This is unfair, unacceptable, and ridiculous. Join over 20,000 Michiganders and tell your lawmakers in Lansing that rigging some electoral votes is the same as rigging them all – don’t do it!