At a media training yesterday, I heard the best comment about Michigan’s lame duck session: “That sucker quacks.”

That it does, but between now and then, we’ve got plenty of progress to make.

Gotta get down on Friday

Friday news dumps are nothing unusual. However, last Friday was an especially tough day for Gov. Snyder, mainly because so much has gone wrong on his watch.

Sure, Michigan is the Great Lakes State, but what’s with all the water-related problems lately?

For Rick Snyder: No Flood of Emotions for Affected Families

Gov. Rick Snyder won’t be winning any personality contests lately, but the least you’d expect from our governor would be baseline compassion for people who’ve lost so much from the flood. But don’t hold your breath.

America is Not for Brown People

Sometimes racial discrimination is quiet and gentle. Other times it’s in your face and blatant. Either way, it’s wrong. 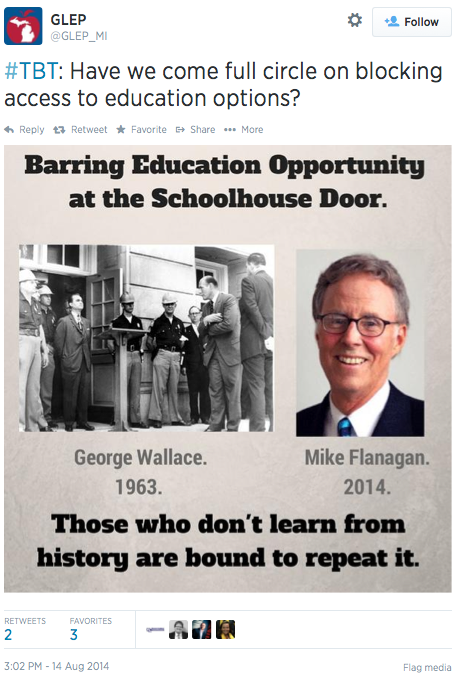 We demanded that GLEP apologize for the tweet and they eventually did.

Comparing blatant racism with accountability over taxpayer dollars is not only a false equivalency, it’s downright sick.

GLEP later removed the tweet and apologized, but only after they posted a string of tweets defending their asinine comment.

We apologize for anyone offended by our post comparing @suptflanagan with George Wallace. It was inappropriate and has been removed.

If GLEP is truly concerned about equality, then maybe they should put their wealth of DeVos money behind marriage and adoption equality or an equal pay for equal work campaign.

Big shout out to the folks at Eclectablog for leveraging Gov. Snyder’s relentlessly out of touch musings on the catastrophic floods that ravaged the Detroit area.

The hashtag #JustLikeTheDetroitFlood was popping up all over the Twitterverse and users were coming up with some great satirical posts aimed at showing Snyder the error of his ways. Here are some of the best:

I need to get that crack on the lake house driveway fixed. Every time it rains it looks #JustLikeTheDetroitFlood — Chris Savage (@Eclectablog) August 14, 2014

One time my kids climbed in the backseat of my Bentley with their swimsuits on and got the seats wet. #JustLikeTheDetroitFlood

The valet left the window cracked open in my Mercedes and it rained while I was having dinner with my broker #JustLikeTheDetroitFlood — Amy Hunter (@amy10506) August 14, 2014

The shower curtain in my room at the Four Seasons didn’t quite close all the way and water leaked onto the floor. #JustLikeTheDetroitFlood — Joyce Overly (@poycer) August 15, 2014

You Can’t Understand Ferguson Without First Understanding These Three Things

Unrest in Ferguson is about more than one police killing