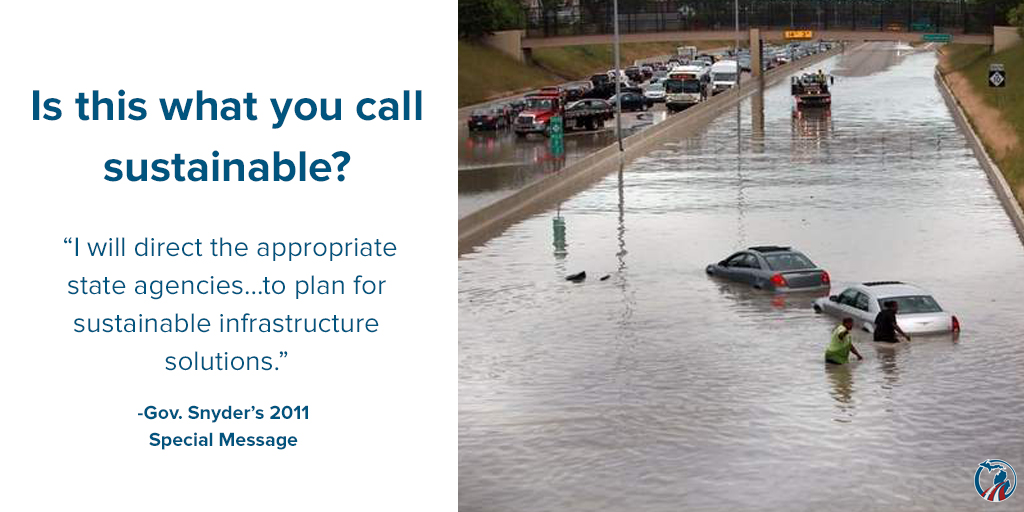 I don’t even know where to begin with all the water problems we’ve been dealing with over the last couple weeks.

For starters, hundreds of thousands of people in Toledo, Ohio were without drinking water after high levels of a dangerous toxin caused by poisonous algae blooms in Lake Erie were discovered in their water supply a couple weeks ago. Affected families lined up outside stores from Monroe all the way to Jackson to buy bottled water.

Then, over the weekend, a water main in Bay County broke and millions of gallons of water were lost. Residents were restricted to only using water for basic needs.

To top it off, on Monday, Detroit experienced the second highest single day of rainfall since 1925. The rain overloaded local storm drains and left streets and highways in Detroit and surrounding metro area neighborhoods under water. Vehicles and drivers were stranded, homes flooded, and residents had to resort to floating in kayaks and boats to get through the streets. Unbelievable.

What’s important to remember in all this is that these aren’t isolated incidents. They are the direct result of both global warming and our elected leaders neglecting our communities’ infrastructure.

As climate change worsens, so will algae blooms in our Great Lakes, and Toledo isn’t the only place at risk. The Environmental Protection Agency defined the toxic blooms as a “major environmental problem” in all 50 states. Rainfall will become more intense, too. Downpours like what happened in Detroit will strain drainage and wastewater systems unless they are rebuilt.

That’s where our need for infrastructure investment comes in. Storm drain systems tend to be out of sight and out of mind for most people, until disasters happen. But just like we need to fix our pothole filled roads, we need to invest in our storm drain infrastructure.

In his 2011 Special Message, Governor Snyder said, “That infrastructure is rapidly aging, much of it nearing or past its useful life. I will direct the appropriate state agencies…to plan for sustainable infrastructure solutions.” Clearly, we have yet to see a sustainable solution put in place.

It’s time for Governor Snyder and our leaders in the legislature to face reality. The safety and homes of every Michigander are in jeopardy and continuing to prioritize billion dollar corporate tax giveaways isn’t going to fix our crumbling infrastructure or prepare us for the unavoidable effects of global warming.