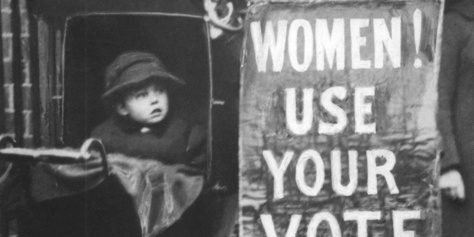 Today marks the 94th anniversary of the ratification of the 19th amendment giving women the right to vote.

Leaders like Elizabeth Cady-Stanton, Lucretia Mott and Susan B. Anthony fought for over 70 years for this right.  They were mocked and opposed in their efforts. When Anthony attempted to vote in a presidential election in 1872, she was arrested and fined $100 – almost a year’s income for a working family during that time.

That all changed in 1919 when the U.S. Senate passed the 19th Amendment. The amendment was then sent to the states for ratification – it only took six days to be approved in Michigan (now that’s quick progress). By 1920, 35 states had approved the amendment and America was only one state short of the two-thirds required for ratification.

The final vote that would determine whether or not women received the constitutional right to vote came down to 23-year-old Republican Representative from Tennessee, Harry Burn. He voted “aye.”

We’ve come a long way since then. Women serve in all branches of government, in the military, on the Supreme Court, and in all professions.  Women are being taken seriously as candidates for the presidency, something that would have been unheard of a few short decades ago.

I wonder if the decision that fell on Rep. Burn had been left up to one of our conservative Michigan legislators, would women still have the same rights that we do today?

It’s hard to say, but if I based my decision on the way women have been treated in our state and across the country in the last year, I’d say no.

Last year, conservatives passed a law requiring women to buy rape insurance. Then, they introduced a package of bills that would require an external ultrasound before any abortion and could criminalize the procedure after a heartbeat is detected, which can occur as early as six to eight weeks into a pregnancy – before many women even realize that they’re pregnant. After that, the U.S. Supreme Court made it easier for anti-choice zealots to harass women as they enter health care facilities. In June, the Supreme Court decided to allow Hobby Lobby, and other wealthy corporations, to refuse to cover birth control for female employees because of their self-professed religious objections.

And that’s not the end of it. I could write volumes on the ways conservatives have been turning back the clock on women’s rights.

We fought too long and too hard not to exercise our hard–earned right to vote on Election Day. So ladies, if what I said above isn’t reason enough for you to get out and cast your ballot, I don’t know what is.