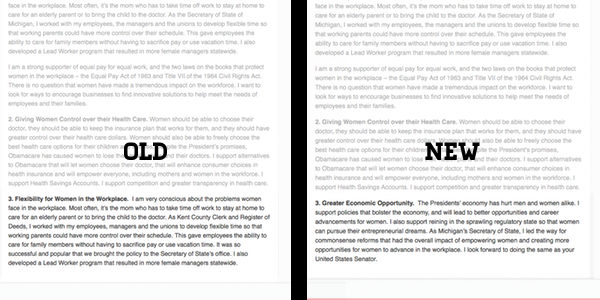 Has anyone seen the size of Terri Lynn Land’s campaign truck? No wonder Michigan’s roads are in such rough shape. What’s the gas mileage on that thing anyway?

Let’s get progressive up in here!

This Week in PM blogging:

Who was John L. Lewis?

In honor of May Day, Hugh Madden, Progress Michigan’s communications director, wrote about his grandfather’s experience in the United Mine Workers union and the important legacy of John L. Lewis, their union president.

Lately (always?), conservatives have been playing fast and loose with the facts, so on National Honesty Day we decided to ask some important questions from those supposedly in the know.

A tale of two rallies

While gun rights activists rallied outside the Capitol to show off their extra big magazine clips, men and women inside weren’t even allowed to bring signs showing their support for equal pay for equal work. Apparently, you’ve got the freedom to openly carry a firearm, but not if that firearm has a political message inscribed on it. Freedom!

At Progress Michigan, we’re all about strengthening the progressive community, and Eclectablog’s stellar efforts in that regard are no exception. We’ve encouraged you to follow them on Twitter, LIKE them on Facebook and donate to help fund their efforts. Well, all of that has paid off – Eclectablog just celebrated their 10-year blogaversary and we couldn’t be happier for them. If you haven’t already, please help support their efforts.

As a citizen watchdog organization, we take pride in holding public officials — and those seeking office — accountable for the policies they support.

Enter Terri Lynn Land. The former secretary of state has been in the news a lot lately for her head-scratching take on the war on women. Sorry, Terri, just because you’re a woman that doesn’t mean you support polices that would actually help women, like a woman’s right to choose, access to affordable health care or equal pay for equal work.

Wait, what? That’s right, Terri Lynn Land is famous for having no strong position on any topic that is important to Michiganders. The problem is so rampant within her campaign that she had to repeat the same policy twice! 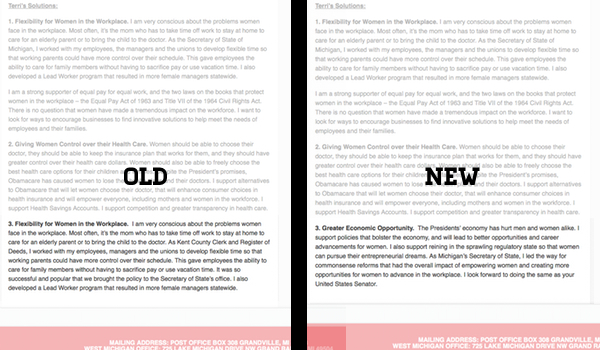 Once we pointed out the duplicate policy, the campaign quickly changed the second iteration of flexibility to “Greater Economic Opportunity,” an equally vague and empty policy stance. You’re welcome, Terri. But, really?

Another note to Land’s campaign: The term “common sense” is not one word. I thought that was…well, you get the idea. But you should probably change that. You’re welcome.

I’m sure this isn’t the last time we’re going to see a Land campaign blunder. If you want to help us in our watchdog efforts, you can use the hashtag #ReallyTerri to help hold her accountable throughout the campaign.

Has anyone seen the website, keepmichigangrowing.com? It turns out Gov. Rick Snyder’s buddies in big business are taking to the internet and airwaves with an ad featuring “smiling” small business owners.

The video features stock photos of “small business owners” who are pleased about Gov. Snyder’s policies of cutting taxes for corporations.

There’s only one HUGE problem with the ad: It claims that “The big guys pay their fair share” — without providing any citation whatsoever. Do you know why? Because it’s not true.

Under Gov. Snyder, corporations got a $1.8 billion tax break, which was paid for by raising taxes on seniors and working families, and making cuts to public education. I don’t really think that’s anything to smile about.

As ALEC ramps up its opposition to EPA regulations through state Attorneys General, Bill Schuette is their poster child

Elizabeth Warren is the teacher