Governor Rick Snyder’s recent campaign ad brands the former Gateway CEO as “One Successful Nerd” and claims “50th out of 50? No way and never again.”

Well, according to Forbes’ “Best States for Business” list, Michigan isn’t 50th out of 50, but it’s pretty darn close. Forbes’ annual rankings had Michigan’s business climate ranked 47th out of 50. 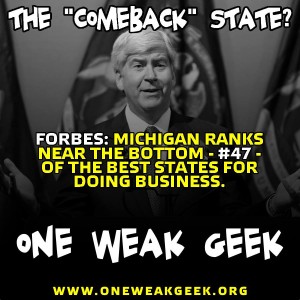 But apparently those huge changes, which included Right to Work, have not made the state better for business — as was often claimed by its proponents.

It’s pretty clear: What Snyder is doing is flat-out not working.

By balancing a $1.8 billion big business tax break on the backs of school kids, seniors and working Michiganders, the results have not faired well. Unemployment has risen for the third straight month and is up to 9 percent. And median household incomes have declined 19.1 percent over the past 10 years — the worst in the country.

Businesses want an educated workforce and good schools for their workers. This is becoming increasingly difficult to achieve with the higher costs of a college education due to lack of state funding and conservatives’ devastating funding cuts to K12 schools.

As for public infrastructure? Businesses want solid roads and bridges to move products and people, but it seems that Snyder (even though it was one of his top priorities) can’t get any support for improving the state’s roadways.  His lack of leadership is becoming more and more apparent.

We’re not exactly sure why Snyder feels comfortable with the title of “One Successful Nerd.” For a governor who is supposedly obsessed with metics and results, his track record is pretty weak.