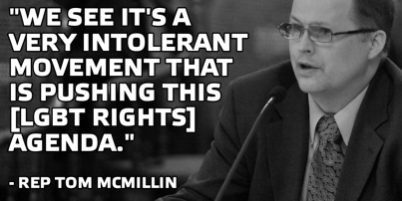 A few months ago, Dave Agema made headlines by openly discriminating against Michigan’s LGBT community, saying they’re responsible for “half the murders in large cities.” Calls for his resignation came from every corner of the political spectrum, except the far-right. When pressed, Gov. Snyder said he wasn’t going to “get in the middle of all that,” and Senate Majority Leader Randy Richardville falsely claimed:

“I don’t agree with his comments, but he’s not speaking on behalf of me or the caucus or, I don’t think, most Republicans in general,” Richardville said.

But Dave Agema does represent the Republican party. In fact, this year the Republican National Committee overwhelmingly voted to support Agema’s resolution defining marriage as between one man and one woman.

When you make bigotry part of your party platform, you breed bigots. Our latest example of far-right extremism comes from Rep. Tom McMillin, who went on the Craig Fahle show to discuss the Supreme Court’s ruling on DOMA. And Tom McMillin didn’t hold anything back, calling – completely unaware of his own hypocrisy – LGBT supporters “a very intolerant movement” and that it has lead to “discrimination against christians” in other countries.

It gets worse, so we’ve taken the liberty of transcribing the important parts:

0:40 – “…if they redefine it for two people, what’s going to stop them from redefining it again for two men and three women or one man and three woman.”

1:35 – “We’re seeing it in other countries that have gone this direction. That it leads to discrimination against christians, parents, people who want to foster children are not allowed to in certain European countries if they believe in the bible and will raise children that way.”

2:00 – “We see it’s a very intolerant movement that is pushing this [LGBT rights] agenda.”

4:10 – “That’s just ridiculous. There’s ministries here in Detroit that have folks that were in the homosexual lifestyle and have came out of it. There’s nobody that was once black and is not black anymore. Ummm… It’s very offensive to, I’ve found, to black folks – friends of mine – to even talk… ya know make that kind of distinction… it’s like another lifestyle choice versus what someone is born with.”

4:48 – “We’ve decided that you are not allowed to marry your mother or your daughter. We’ve said that you can’t marry a child that’s underage.”

5:38 – “A breakdown of the family. We’ve seen what happens with the welfare rolls. With crime. Umm… it has a very strong interest in abiding by what is traditional in the area of marriage.”