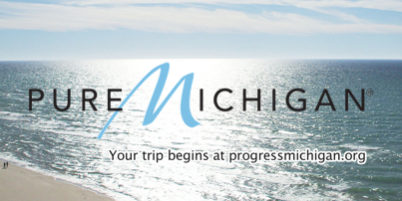 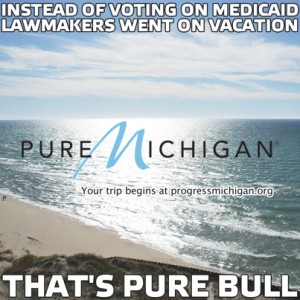 Last week, Lansing politicians left for vacation to attend a $400 per person fishing fundraiser instead of voting to provide lifesaving health care to nearly half a million struggling Michiganders.

The worst part? The costs associated with unexpected health emergencies will eat into the budgets of working Michiganders, and – without Medicaid – further endangers the well-being of Michigan’s children.

…the lowest ranking among all Great Lakes states.

The state’s poverty rate jumped 32 percent between 2005 and 2011, the 10th largest increase in the United States. Roughly 35 percent of kids grew up in a household where their parents lacked secure employment.

Now, the Detroit News is publishing satirical pieces calling attention to One not-so Tough Nerd’s weakness in dealing with the far-right ideologues in his own party:

Editor’s note: Read with tongue planted firmly in your cheek.  Any resemblance to reality is “Pure Michigan”

Unfortunately, the ideologically driven policies being pushed by the far-right have become par for the course in Michigan; usually over the howls and protests of a majority of Michiganders.

VaginaGate. Medicaid. Snyder and the MEDC shamelessly re-appropriating the Pure Michigan brand and spending $144,000 of your tax dollars to promote so-called Right to Work in the Wall Street Journal.

It doesn’t matter. Like the pristine golf courses along our beautiful coastline, short-sighted policies and mean-spirited antics have become synonymous with “Pure Michigan.”

And if you ask me, that’s pure bull. Help us save Michigan by telling the far-right that we’re not customers, and Michigan is not for sale.