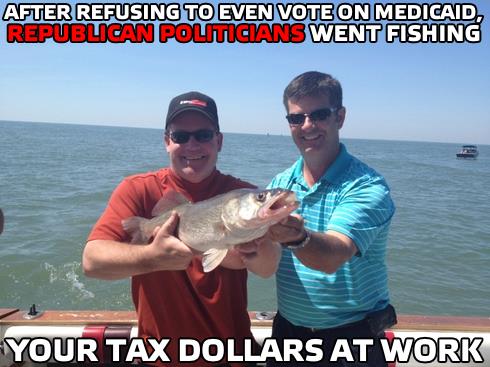 Randy Richardville, not helping half a million uninsured Michiganders

Last Thursday, Republicans in the Michigan Senate wouldn’t even agree to let Medicaid expansion come up for a simple up or down vote, which would’ve ensured that nearly half a million uninsured Michiganders will now be able to obtain health insurance.

It was an absurd process, forcing Lt. Gov. Brian Calley to return early from his “Pure Michigan” trip the U.P. and cutting short Gov. Snyder’s trip to Israel, both of which had oddly been scheduled for the last week of legislative session before the summer break.

This week-long scramble and last week’s late night session that saw Rep. Lisa Lyons comparing educators to pigs were each the product of Lansing politicians’ arbitrary insistence on starting their summer break today.

If Lansing politicians are trying to make a case for a part-time legislature, they’re doing a great job.

Every day of their three-month vacation, the state will lose $3 million to our crumbling infrastructure, still without a long-term fix. Kids in dozens of school districts will spend the summer looking forward to another year of uncertainty over the future of their community public schools. And tens of thousands of working families will spend the summer not knowing if they’ll ever be able to get affordable health care.

What Lansing politicians don’t seem to get is that press releases and talking points about “putting kids first” and “fixing Michigan” don’t do anything to address the reality that too many middle-class families are forced to deal with every day.

It’s sad that their response to a record 10 percent of districts being in fiscal crisis is to work to shut down those schools and cast blame at everyone else, even stooping to name-calling.

But it’s even sadder that, thanks to political games over Obamacare and a deadline of their own making, Republicans have ensured that half a million low-income Michiganians will go without health insurance. Those Michiganders covered by the expansion of Medicaid earn no more than just $15,282 in a year, or 133 percent of the federal poverty line.

Meanwhile, this summer Lansing politicians will continue to draw their salaries of at least $71,685, or nearly five times as much as those who don’t have access to Medicaid because they live in Michigan. As I write this Senate Majority Leader Richardville, who refused to even bring the measure to a vote, is on his annual “Walleye Outing” fundraiser at the Toledo Beach Marina. Tickets are $400 apiece – or $2,000 for six.

Tell me again – who are the real pigs in Lansing?