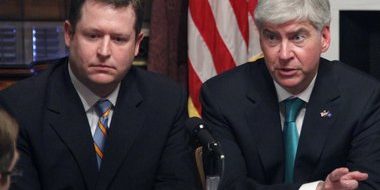 Yesterday Speaker Bolger released a video in which he said that, contrary to a recent report in the Detroit News, Gov. Snyder’s budget actually represents an increase in spending on K-12 education.

It’s clear that after they were held accountable for their deep education cuts and tax increases on middle-class families in November, Bolger and Republicans are feeling awfully thin-skinned.

We think he needs a little help with his “simple math.” What do you think Speaker Bolger will claim next? That the pension tax was actually a tax cut? That cutting workers’ wages by blocking Michigan’s prevailing wage law will be good for workers? That making emergency abortions and contraception nearly impossible to obtain will protect women?

Join us on Twitter, where we’re calling out Speaker Bolger for his “simple math.”