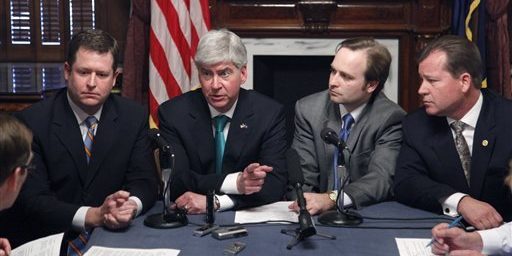 A favorite trick of Republican pundits and hacks after President Obama’s election (in 2008 and 2012) is to discredit him as illegitimate, or lacking a mandate. In 2008, they blamed ACORN. This year, they’re already blaming Superstorm Sandy, claiming that it moved the polls by 4-5 points in the last few weeks, despite actual poll numbers showing Romney’s “momentum” stopped on October 14. The facts, though difficult for conservatives to swallow, are that a clear majority of the American people voted for Barack Obama to be re-elected.

But you know who actually doesn’t have a mandate? Rick Snyder, and Michigan’s House Republicans. They’ll retain their majority, with 59 seats to Democrats’ 51. And headlines are already condemning Democrats for “squandering money” on this race or that race. But the facts are clear:

Despite the post-election spin, no one really thought that Democrats had a realistic shot at retaking a majority in the House.

We can only hope that Republicans, left with control of Lansing for two more years, will reassess their priorities and actually work on growing an economy that works for middle-class families, not just their corporate donors.