February 21st Caption Contest – And the winner is… 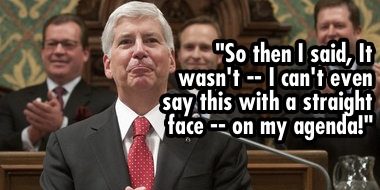 We know the issues we cover on a daily basis are serious and personally affect a lot of Michiganders, but from time to time we like to lighten the mood and have a little fun.

In the past, we’ve simply posted photos that lend themselves to humorous captions and left it to our Facebook and Twitter communities to do the rest. While we’re still doing that, we’re going to throw in an additional wrinkle: we’re going to put the winning caption on the photo and share it with anyone who cares to look.

Our first entry comes courtesy of Gov. Snyder’s State of the State speech. 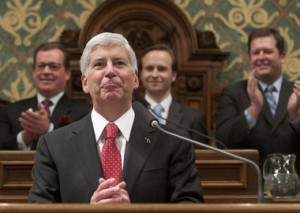 For more than two years the supposedly moderate Gov. Snyder convinced Michiganders and members of the media that Right to Work was “not on his agenda.” He was the post-partisan businessman, or so everyone thought.

Then the Michigan legislature rammed through Right to Work during a lame duck session with zero public input, and Rick “Not on my agenda” Snyder promptly signed it. You can almost imagine him chuckling to himself, “I can’t believe they bought it!” 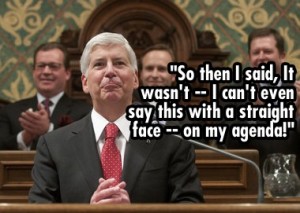 And here’s why this should concern you and yours: Gov Snyder recently applied the “not on my agenda” language to repealing prevailing wage laws. And if history has taught us anything, you can bet your bottom dollar it is on his agenda. And if it’s not, he’ll sign it anyway.