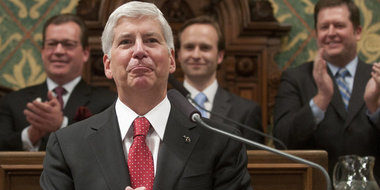 It’s tax time, and it’s going to hit the wallets of middle class families in Michigan now more than ever.

Legislation pushed through by Governor Rick Snyder and Republican lawmakers is taking effect. And now it’s time to pay the piper. Seniors and poor families were hit the hardest – but incredibly, Lansing Republicans raised taxes on individual taxpayers in every income bracket.

The Earned Income Tax Credit was axed along with the credit for charity donations. The homestead property tax was slashed as well.

You’ll definitely be shelling out more this tax season. According to the nonpartisan House Fiscal Agency, retired couples will be hammered for more in taxes based on when they were born and who they worked for – a concept the governor likes to call “simple, fair and efficient.”

The only ones exempt from the fallout are big corporations and wealthy special interests, who are laughing all the way to the bank.

These “job creators” got a tax giveaway of $1.6 billion dollars with no strings attached. They don’t have to actually prove they’re creating jobs. They already got their taxpayer-financed handout, with no burden of results.

Now Speaker Bolger is saying it’s all “simple math,” that if you crunch the numbers, schools are incrementally getting more money every year.

The reality is that Speaker Bolger and other Republican lawmakers quite simply can’t do math.

Education funding was drastically slashed to spot corporations with a hefty tax giveaway. You and I are paying more out-of-pocket to fatten their bottom lines. A massive tax break for corporations, and the cost is balanced on the backs of school children, seniors, charities and low-income families.

I know a number of hardworking teachers. Maybe Speaker Bolger should attend their overcrowded classrooms to refresh his math skills. And to master the simple difference between right and wrong.