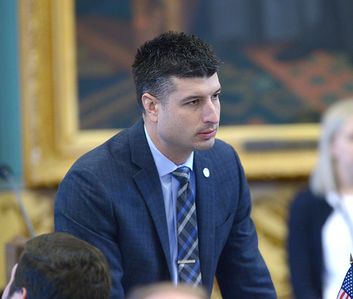 LANSING — State Senator Tom Barrett dialed in to a radio show Wednesday morning to defend an anti-abortion policy disguised as a tax bill, making false claims against Progress Michigan in the process and ignoring the group’s criticism of his bill.

On Tuesday, Progress Michigan sent out a press release calling Barrett’s bill an attempt to establish personhood for a fetus as a way to further curtail abortion rights in Michigan.

On 1320 WILS on Wednesday, Barrett had this to say about Progress Michigan:

“I’m not surprised they don’t want women to carry their babies because Progress Michigan is a very pro-abortion organization and that’s unfortunate.”

“Let’s get something straight: Progress Michigan is committed to ensuring people who become pregnant have everything they need including, health care, paid leave, food and housing, and the freedom to continue the pregnancy or not,” said Sam Inglot, deputy director of Progress Michigan. “Tom Barrett’s priorities remain elsewhere, namely making abortion illegal and forcing people to carry a pregnancy to term. This bill offers to put money in people’s pockets, while ripping reproductive freedom from their hands. It’s a heinous bait-and-switch that should be deducted from the Legislature’s docket.”

The fact is, Barrett is doing everything he can to ban abortion in Michigan at every stage of pregnancy. He co-sponsored a so-called “fetal heartbeat” bill that relies on sketchy science and would place extra burdens on patients and doctors seeking early abortions. He has sponsored a bill banning D&E abortions, which is one of the safest second trimester abortion procedures. And now he is pushing to establish personhood at 12-weeks gestation for a fetus, which could have legal implications for pregnant people and doctors down the road.

During his opening statement, while claiming his bill has nothing to do with forcing people to have children by making abortions more difficult to obtain, Barrett said, “In Michigan, we want people to have babies. We want to grow our population. One of the reasons that we have a precarious budget situation at times is because we’ve lost population.” But then downplayed the significance of the bill by saying “a tax credit like this is not going to be the deciding factor in” whether people decide to have a child or not.

“Michigan is in a precarious budget situation because elected officials like Tom Barrett are more focused on taking away the freedom to have an abortion instead of fixing our broken tax system,” Inglot continued. “Tom Barrett can claim this bill isn’t about setting the stage for further restrictions on abortion rights, but when you look at his record and who he’s aligned himself with, it’s clear where his priorities lie.”