When Private Citizens Become Responsible for the Public Good 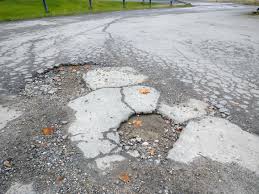 Monte Scott, a 12-year-old in Muskegon, made headlines this week with his efforts to fix the damn roads by filling potholes in his neighborhood. On the surface, Scott’s story is an aspirational one, where a kid who has watched his mother struggle with repair bills decides to step up and do his part to help the community. On the other hand, it begs a crucial question: Why should a literal child have to shoulder the burden of fixing a problem created by our elected officials?

The simple answer is that our elected officials have let us down. Maintaining our public roads is one of our state government’s most important functions, but Republicans’ decision to prioritize corporate tax breaks instead of making needed investments in infrastructure has left our roads in shambles. Monte Scott is doing his best to fill this gap created by a policy failure.

He’s not the only one picking up the slack for our elected officials. Take, for example, teachers in Michigan and across the country who spend their own money buying classroom supplies their schools are unable to provide. However heartwarming this dedication to their students is, teachers—who are already underpaid—shouldn’t be expected to pay the price for the funding cuts our elected officials have made over the past few decades.

Pothole-filling youths and teachers buying their own supplies are symptoms of a broader problem: Elected officials’ choice to neglect their role in protecting their constituents’ wellbeing and force ordinary folks to do their jobs for them.

That’s why we see people creating GoFundMes to pay for their health care. It’s why low-income folks often depend on charity food banks, and why Flint residents have had to rely on bottled water donations. To be clear, the people donating to these causes are great—but no one’s ability to meet their basic needs should be contingent on the kindness of strangers.

For too long, our elected officials have let corporate interests run the show instead of doing their job to protect and support ordinary folks. It’s time for that to change.

We need to remind our elected officials that our government is meant to be of, by, and for the people and demand that they put ordinary people first, make sure corporations and the wealthy are paying their fair share, and start taking responsibility for their role in ensuring their constituents’ needs are met.