MICHIGAN — Progress Michigan is calling for the resignation of Grosse Pointe Shores City Councilman Matthew Seely, who posted a meme to a Facebook group that jokes about sexual assault.

“This type of behavior cannot be tolerated by a public official. It’s disgusting, dehumanizing, and it makes light of sexual assault and rape. This meme is an attack on survivors. Matthew Seely needs to step down immediately and publicly apologize for making jokes about such a serious crime,” said Lonnie Scott, executive director of Progress Michigan. “Sexual violence is a real problem in this country and we need to have public officials who recognize that, not make fun of it for political purposes. It’s disturbing that there are people and online communities who tolerate this type of behavior, but we cannot allow it to be present in our city governments.”

The meme Seely posted shows a woman consoling another woman with the text reading: “I’m so sorry that bad man touched you inappropriately. Let’s wait 30 or 40 years…until he runs for office…against a democrat!”

The image can be found below. It was posted to a “Michigan Trump Republicans” Facebook group on September 17th. Seely posted the meme to a “The Deplorables” Facebook page as well and has a habit of posting memes that objectify women and continue to make light of sexual assault allegations (see below). Seely also is listed under the leadership tab of the 14th District Republican Committee. 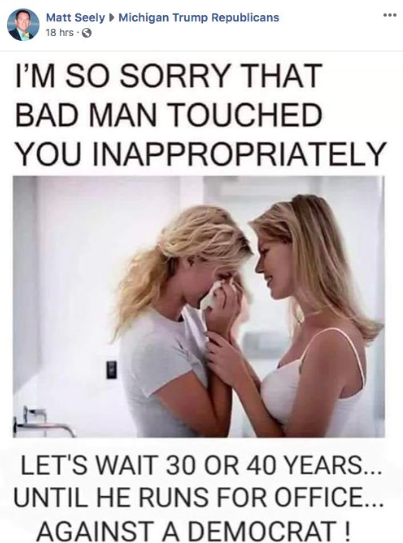 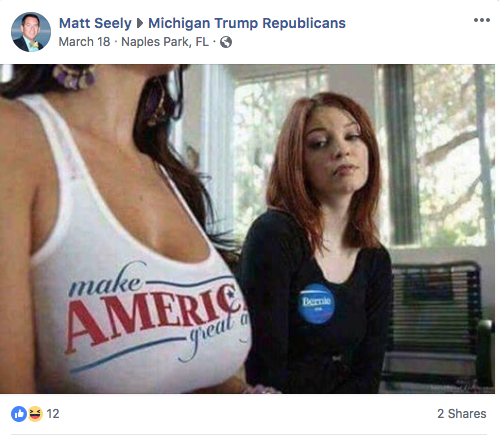 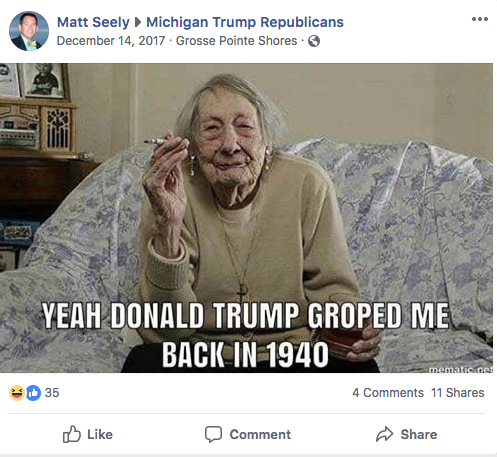