Talking About Race is for White People, Too 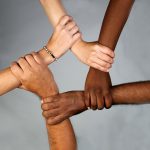 For people of color in the United States, being conscious of one’s racial identity isn’t an option. White folks, on the other hand, have made up the majority of the population for centuries. As a result, we often view ourselves as a sort of default population whose race is insignificant–almost as if we have no race at all.

In the past few decades, increased diversity has changed that–and the Census bureau estimates that America will become a majority-minority country within the next 30 years. In no way does this news pose any tangible threat to white America, but many fear it anyway. In fact, researchers have found that white people who become more aware of demographic shifts tend to adopt more racist attitudes.

And when white people begin to feel threatened by the prospect of increasing diversity, they turn to reactionary public figures like Alex Jones and Milo Yiannopoulos, who feed them toxic false narratives insisting they are under attack. This kind of fear has fueled the rise of the alt-right and paved the way for people like President Trump to bring outright racism back into the mainstream.

It’s clear that those of us who value racial justice–or at the very least, oppose blatant bigotry–outnumber the white guys marching with tiki torches, but more moderate white folks have made a crucial mistake that opens the door for the alt-right: not talking about whiteness.

There are a lot of reasons why white people don’t talk much about race. Some prefer to feign color blindness, while others may be uncomfortable confronting the privileges that come with being white. Many seem to view talking about race as some sort of taboo, and do their best to avoid it altogether. Between this reluctance to even invoke the concept of whiteness and the way the American definition of “white” has strategically expanded over time to keep a racial majority, white people as a collective don’t really have a racial identity–the entire consciousness of being white centers on being the majority group.

Avoiding the topic of race may seem to many like the safe route–but it’s extremely dangerous, because it has allowed alarmists and extremists to dictate the narrative on whiteness. As a result, far too many white Americans have embraced the racism and xenophobia of the alt-right in their search for a cultural identity and an outlet for their subconscious fears.

As progressives, and as white folks disheartened by the rise of white nationalism, we have to do better. Of course, discussing the very real problems of institutional racism and the many ways in which racially marginalized communities continue to suffer is crucial–but we also need to find a better way to talk about what it means to be white.

However unfounded a fear of diversity might be, it has permeated the consciousness of white America and continues to encourage more extreme forms of racial resentment and violence–and we all have a vested interest in reaching disaffected white people before they buy into white nationalist calls for alarm.

Those of us who want to dismantle white supremacy need to set an example of how to have conversations about race by talking openly–both in public and with our friends and family–about issues like white privilege, the legacy of racism, and how diversity makes us all stronger. We need to address our own internal biases, encourage people to confront their race-related fears head-on, and unpack why so many people feel threatened by demographic change. Talking about race isn’t just a task for racially marginalized groups–it’s for all of us.