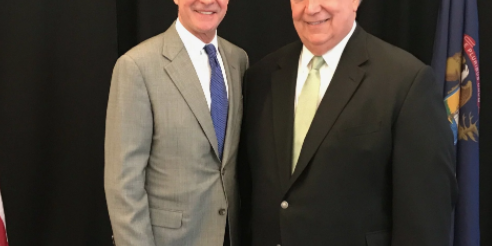 Republican former Governor John Engler, serving as the interim president at Michigan State University, was a mistake from the beginning.

As Progress Michigan has detailed before, Engler doesn’t have much of a record to stand on when it comes to protecting public education and/or vulnerable people from sexual abuse. He refused to allow the U.S. Department of Justice access to state prisons to investigate violations of the civil rights of female inmates.

Now he has allegedly offered to write a check to quell concerns from a woman who was sexually assaulted by former MSU and USA Gymnastics doctor Larry Nassar.

And this is merely a continuation of a troubling pattern. The Great Lakes Beacon has previously reported Engler’s disrespectful language toward women professors in an open, faculty senate meeting, as well as stating that, “the only way to make a lawsuit go away is not to change behaviors, but to write a check.”

The proof is all there: The only thing John Engler cares about is money – even if it takes blaming all the survivors of sexual assault who have come forth with a lawsuit by saying their actions may have to be paid for by students and/or taxpayers – and not actually improving the culture in a meaningful manner, despite that many alum, myself included, would prefer the latter if we had to choose.

Of course, we shouldn’t have to choose. For all the terrible people who cared more about their jobs and the reputation of MSU than the very people attending it, there are an equal number of people – alum or not – eagerly waiting to make it a better place and to return it to a respectable institution however they can. The Larry Nassar scandal will never go away no matter how much MSU hopes it will, but what can go away is the obvious, tone-deaf approach John Engler and the MSU Board of Trustees are taking right now.

It’s not time to do all the things you thought you knew – it’s time to start listening to new ideas and welcoming challenges to the status quo approach.

We don’t know how long Engler will be an “interim” president, but at the rate he’s going, it’s painfully obvious change needs to come sooner rather than later.