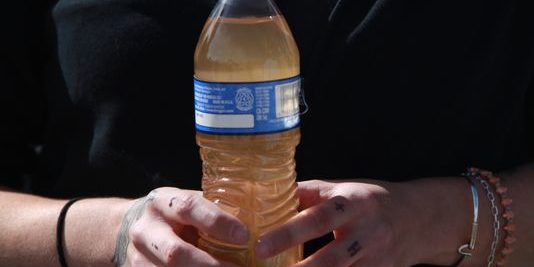 LANSING — On Wednesday, Flint residents chanted in the House chambers demanding access to clean water, which led to House Republicans fleeing to a back room to ignore their protests. Over in the Senate, Republicans were introducing a resolution to give a special day of honor to a group they hold in very high regard: corporations. The dueling events show who is prioritized by the Republican legislature, especially in the wake of the controversial Nestle decision to allow the corporation to pump more of Michigan’s water, while Flint families have their supplies cut off.

“In Michigan, Republicans have bent over backwards to make sure corporations and their CEOs can give as much money as they want and can take as much water as they want. And now, they want a day that explicitly honors their CEO overlords,” said Lonnie Scott, executive director of Progress Michigan. “Republicans in this state treat corporations better than they do actual people. Maybe some elected officials have forgotten this, but they’re supposed to work for the people of Michigan, not for-profit corporations.”

Republicans are often rightly accused of being beholden to corporate donors and their latest move proves that point even further. Republicans in the State Senate have introduced a resolution calling for April 12th to be a day to honor corporations in Michigan, calling it “Corporate Citizenship Day.”

The resolution also makes some hyperbolic claims that stand in contrast to reality. The resolution states, “Corporations have been doing business as responsible citizens in the state of Michigan and around the world” and corporations are stewards in “protecting and nurturing the environment.

“From oil spills, chemical dumps, and pollution, it’s important that we note how some irresponsible corporations and CEOs have hurt Michigan’s communities and hold them accountable, not gloss over the problems with platitudes that only stoke their egos,” Scott continued. “There is no better example of a bad corporate actor than Nestle, which the state is allowing to practically steal our water and then sell it back to us for profit while some Flint residents still have no access to fresh, clean and affordable water. This resolution is slap in the face to those who have suffered because of corporations who care more about profits over people and the Michigan Republicans who enable them.”