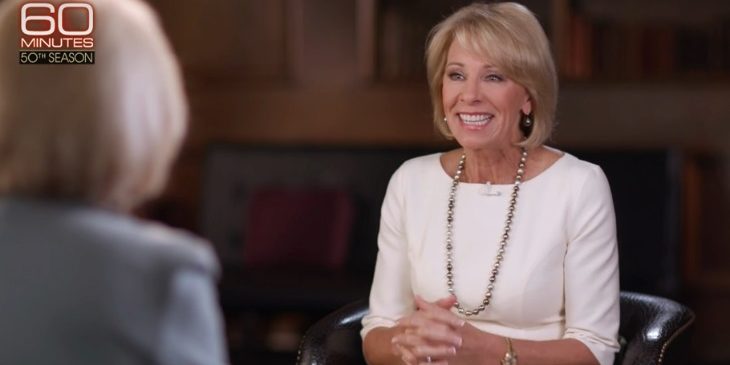 Education Secretary and mega Trump donor Betsy DeVos had a hard time in her 60 Minutes interview. Despite the fact that Secretary DeVos had advanced notice of the interview, she did not perform well. DeVos looked like a student giving an oral book report despite never cracking open the book.

DeVos stumbled when asked about funding education – making an odd comment about funding kids but not schools (as if funding schools isn’t about the children who attend them.) Then she didn’t know how Michigan schools are failing despite her years of  involvement through donations to a failed right-wing experiment in Michigan.

In all, her interview was a train wreck. If she was a student, her performance would have received a failing grade. The simple fact of the matter is a 60 Minutes interview is standard protocol for public officials. The show has been around for fifty years and the format has is pretty standardized. Despite her year on the job, decades of so-called interest in education and access to taxpayer funded communications professionals, she failed miserably. DeVos intended her interview to prove that her vision of a for profit-driven, putting students last education system is the way to go, instead the interview was just another example of why we shouldn’t let billionaires with zero experience buy cabinet positions.