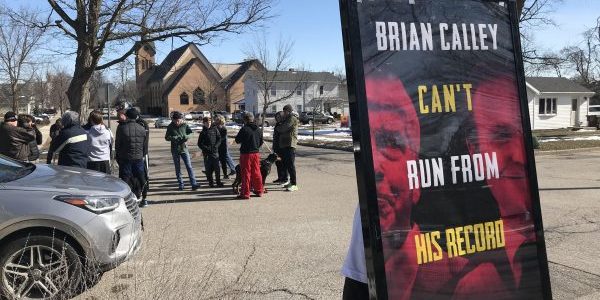 PORTLAND, Mich. — On March 11th, Lieutenant Governor Brian Calley was in Downtown Portland, MI to shoot a video and Progress Michigan was on the scene to make sure Calley didn’t try to run from his record. The watchdog group heard that Calley wanted runners in his video, so they dusted off the jogging gear and showed up.

A video of the event can be found here.

“Brian Calley is married to the decade of deceit whether he likes it or not. From the Flint Water Crisis and skyrocketing tuition, to crumbling roads and billions in unaccountable corporate tax handouts, Calley has been Snyder’s right hand man in the state and he has to own these failures,” said Sam Inglot, deputy communications director for Progress Michigan, who wore a backpack billboard with the words “Brian Calley Can’t Run From His Record” emblazoned across it at the Sunday event. “Republicans like Calley, Rick Snyder, and Bill Schuette have run this state for nearly a decade and failure after failure is all they have to show for it. We wanted to come out to show Calley he doesn’t get to slap a smile and some happy talk on his administration’s failures.”

In addition to the video, Progress Michigan filed a Freedom of Information Act request with the City of Portland for communications between city departments, Calley’s public office and campaign, and any vendors hired for the video shoot. Progress Michigan observed numerous street closures and police presence during the video shoot and is interested in making sure everything was done in accordance with the law. The FOIA request also falls on Sunshine Week, a time when transparency issues in government are brought to the forefront.

“Calley can run marathons and, as evidenced by the video, can clearly outrun me, but we won’t let him run from his record of failing Michigan families,” Inglot concluded.