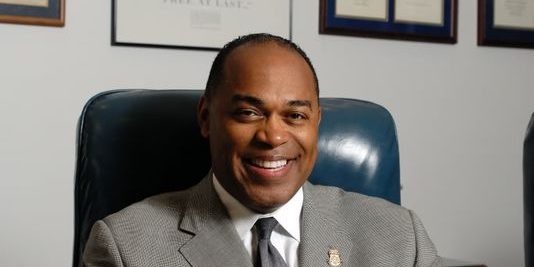 Last week, Governor Rick Snyder appointed three new members to the Michigan Civil Rights Commission, one of whom is the outspoken anti-LGBTQ activist and bishop, Ira Combs, Jr. After decades of working against the best interests of LGBTQ Michiganders, Combs was met with criticism from equality activists and elected officials alike questioning his place on the commission.

Over the weekend, when a Free Press reporter asked him to respond to the criticism, he said he wasn’t concerned because “(LGBTQ communities) are not disadvantaged.”

For starters, Combs himself has a storied history of going to battle against pro-LGBTQ causes and groups. He whole-heartedly supported Attorney General Bill Schuette’s efforts to bar same-sex marriages from being recognized by the state of Michigan. Combs even sank so low as to propose an ‘opposition group’ when Jackson high-schoolers formed a Gay-Straight Alliance club at their school. The dude is not kind to the LGBTQ community, let alone in step with popular opinions and current scientific understanding surrounding homosexuality and gender identity.

If that’s not enough, Michigan currently ranks as one of the worst states when it comes to LGBTQ equality. Since Mr. Combs seems content to ignore this fact, let’s break down some of the most notable ways LGBTQ Michiganders are, in fact, disadvantaged:

I could go on, but you get the point. The question is, does Rick Snyder get it? Does Ira Combs? Definitely not. Combs told the Free Press he planned to focus on women’s rights because “we can see how under attack women are right now.” As a woman, I will speak for my people when I say, “Thanks…I guess.” To that point, I’m guessing Mr. Combs is unaware that LGBTQ women experience violence, both sexual and domestic, at higher rates than their heterosexual and cisgender counterparts. The ACLU and the National Coalition of Anti-Violence Projects have those facts.

Combs has been a lifelong advocate for the civil rights of Black communities, which is commendable, of course. But guess what? Black people can also be gay, bisexual, gender non-conforming, transgender and more. In fact, over 1 million Black LGBTQ Americans currently exist in this country. If he is indeed to protect the Black community, he needs to include everyone.

To tie Combs’ passion projects together: 1 in 4 transgender individuals face bias-driven violence; that number is even higher for trans women of color. In fact, 2017 was the deadliest year on record for trans people with 28 murders. Of those 28, 22 were women of color. The communities Combs has promised to protect include the very people he has said don’t need protection. How can he possibly do the job Snyder has trusted him with?

I refuse to believe this appointment was an oversight on Snyder’s part. It appears to be a calculated attempt to continue to uphold bigoted legislation that has no place in modern society, not to mention the great state of Michigan. With a majority of Michiganders in support of same-sex marriage and civil rights protections for their LGBTQ friends and neighbors, we cannot allow our elected officials – or their appointees – to keep us in the dark ages.