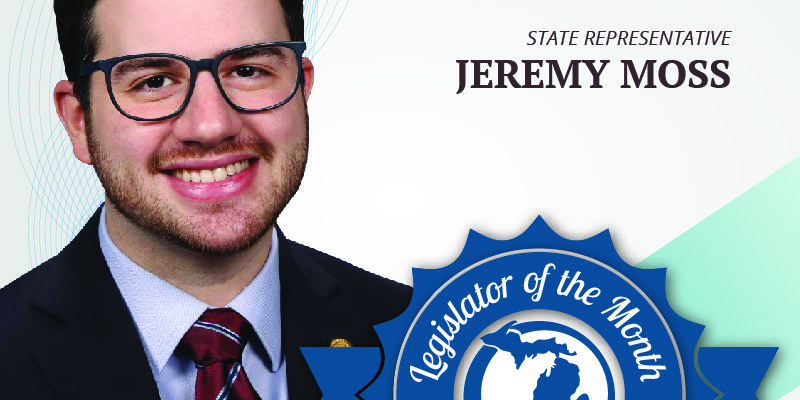 LANSING — Progress Michigan named Representative Jeremy Moss the Legislator of the Month for March. Representative Moss was awarded for his leadership in the fight to bring more transparency and accountability to state government by making the governor’s office and state legislative bodies subject to open records laws.

“Representative Moss has led the charge to hold the legislature and governor’s office accountable his entire time in Lansing,” said Hugh Madden, communications director of Progress Michigan. “The people deserve to know not just what their government is doing but they also deserve to know how things get done on a day to day basis.”

“I work hard to seek opportunities across the aisle to make our government more transparent and effective and I’m proud of my work to expand Michigan’s Freedom of Information Act. Even while tackling these issues with bipartisan support, I remain a staunch advocate for progressive values,” said State Representative Jeremy Moss. “I’m a subscriber to the late Sen. Paul Wellstone’s political philosophy that, ‘We all do better when we all do better.’ I join with modern day Progressives who push for the big changes to government institutions that will have the biggest impact to make our lives better. I appreciate Progress Michigan’s acknowledgement of my work in Lansing.”

The Progress Michigan Legislator of the Month award goes to an elected official who demonstrates a commitment to government that is of, by, and for the people.