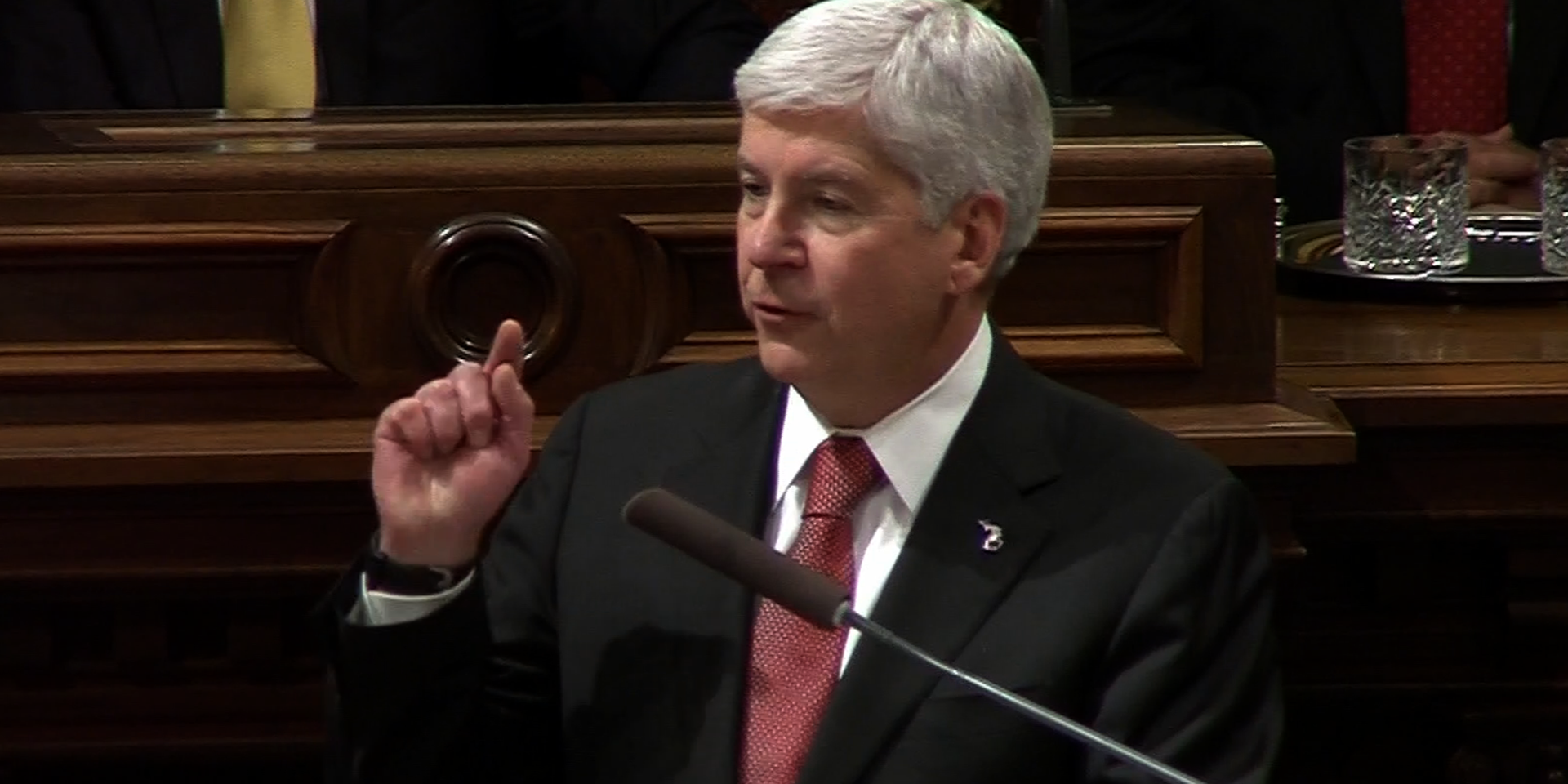 Last night, Governor Snyder delivered his seventh State of the State address. The speech was filled with “shout outs” to numerous people and businesses across the state. Snyder took time to pat himself on the back for reinventing Michigan and there was even talk about the quality of the cows in Michigan (second only to Colorado cows.) But there were many missed opportunities in the speech. There were so many missed opportunities, so let’s take a look at a few of them:

Rick Snyder is a numbers guy. He loves charts and stats and figures and pie charts. Snyder is not a people guy – he literally spends more time talking about robots than about the actual human impact of the numbers and his policies. Snyder failed to talk about kitchen table issues last night. He didn’t offer solutions to make college more affordable or discuss the ways that families are struggling due to the Republican tax shift or cuts to vital programs. Governor Snyder and Michigan Republicans don’t like discussing the real world impacts of their policies because the day-to-day lives of Michiganders under complete Republican control are not as rosy as the statistically-driven drivel suggests.

Last year, Snyder spent much of his speech talking about the Flint Water Crisis and went so far as to apologize and promise to fix the problem. But this year, Flint was given a scant 95 seconds of attention. This is probably because the crisis has been absent from the front pages so he didn’t feel compelled to discuss it. The other reason that Snyder failed to discuss Flint is because deep down he knows that he failed to fix it. If Snyder thought for one second that Flint was fixed, he would have literally done a victory lap around the House chamber. The fact that he didn’t take that lap is proof that Snyder and his hand-picked Mr. Fix-Flint Lt. Gov. Brian Calley have failed the people of Flint.

Another missed opportunity was the current water issues in the Downriver area (South Detroit if you’re a Journey fan.) Downriver communities are currently dealing with water that has a sulfur smell and many fear that the next Flint-style crisis has found its way to their taps. The fact that Rick Snyder missed an opportunity to talk to the people Downriver is further proof that he hasn’t learned a thing from the Flint Water Crisis.

LGBTQ and Communities of Color

One unfortunate Michigan headline Snyder avoided was the rise in hate crimes after the election of Donald Trump. Michigan had the highest number of post-election hate crimes in the Midwest. Communities of color, Muslims and the LGBTQ community need to feel safe regardless of who is in the White House. That’s something the state’s highest elected official needs to address head on, especially in wake his party’s election. In that vein, Michigan is sorely lacking leadership when it comes to LGBTQ issues. Despite his half-hearted attempts to address the fact that loving couples can get married on Saturday and fired on Monday, Michigan is still far behind other states in protections for LGBTQ people.

Losing your job is tough but getting falsely accused of fraud by the state adds insult to injury. The privatized, automated system put in place by the Snyder administration wrongly accused 20,000 people of fraud – leading to sleepless nights and undue economic hardship on those already struggling to make ends meet.  This is on top of the fact that the Republicans in the legislature reduced unemployment from 26 weeks to 20 weeks in 2011. The least Governor Snyder could have done was apologize on statewide television to those affected and promise the rest of us that his administration will not allow problems like this to happen again.

Snyder did make an attempt at a pun during his portion of the speech focused on cows. When he pointed out that Colorado has the best cows he said, “Colorado needs to MOOOve on.” This too seems like a missed opportunity. A better pun would have been to say that the fact that Michigan isn’t number one is “UDDERly ridiculous.”