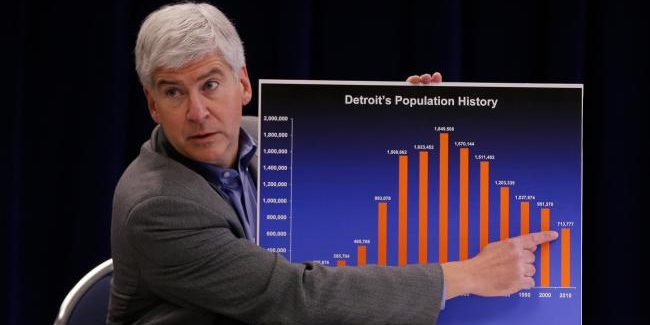 Remember when I blogged about how great it would be if leaders in Lansing created a budget that bettered the lives of all Michigan residents? Well, that’s not what Governor Snyder did when he presented his 2016 budget on Wednesday.

Just as he did during his last term, the governor has plans to slash programs that benefit regular people like you and me, because he doesn’t think it’s important that everyone has the chance to lead a good quality of life, especially not when it might mean making big businesses and the wealthiest pay their fair share.

Our governor’s biggest problem is that he fails to look at the big picture. He views himself as a CEO, Michigan as a business, and residents as customers. And what do CEOs do best? They look for ways to reap short-term profits, often (deliberately) failing to consider the long-term impacts of their decisions on anyone other than their wealthy stakeholders.

That has been our governor’s legacy. In 2011, he gave corporations a $1.8 billion tax cut that was paid for by slashing funding for education, public services, and local communities, all to appease the so-called “job creators” that have yet to create substantial jobs. Colleges and universities have been forced to raise their tuitions, making it harder for students to afford to go to college. Communities struggle to maintain public libraries and have had to cut police and fire protection. Schools have had to lay off guidance counselors and eliminate music and arts programs.

As Snyder’s big business bankrollers keep cashing in, we keep getting screwed. In January, state officials announced that big business cashing in tax credits has created a huge hole in the state budget. According to Governor Snyder, this is “a good problem to have.”

I don’t know anyone who thinks that it’s good that the governor created this problem or that his solution is more and more cuts – to state police, a disaster assistance program, our Department of Community Health, the two departments responsible for keeping our air and water clean, and more.

This proposed “solution” isn’t good for anyone except big businesses. But, that doesn’t matter to Snyder because, to him, we aren’t his constituents, we’re customers; Michigan isn’t a place where we live, work, and together call home, it’s a business; and he’s not a public servant, elected to office to do what’s best for everyone in our state, he’s a CEO, here to do whatever it takes to rake in profits for his wealthiest and well-connected contributors. Let’s hope our legislators don’t share the same perspective.