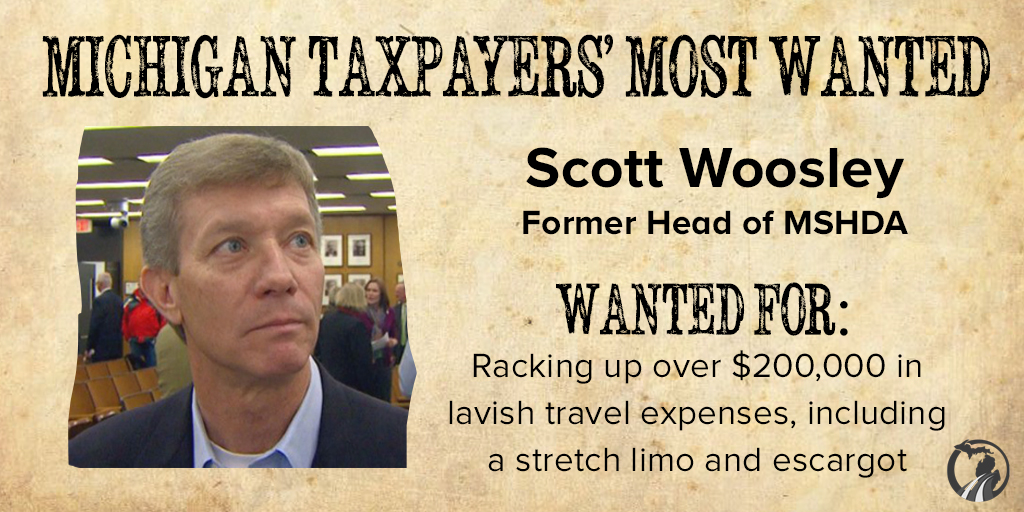 All I can say is, it’s about time.

Numerous outlets reported today that the Department of Housing and Urban Development is investigating “a potential conflict of interest or misuse of federal funds” by the former head of MSHDA, Scott Woosley.

You might remember the headlines about Woosley living the high life while at MSHDA, where he tried to write off things like filet mignon and top-shelf liquor on his expense reports.

Woosley resigned the day after the news broke and we called on him to repay what he had improperly spent.

But while Woosley was at MSHDA, his private real estate investment company was receiving federal grant money from MSHDA. That’s why the feds were called in.

“Records show Labor Management got just more than $1 million from a $98-million HUD grant that the Michigan State Housing Development Authority received in 2008 for its Neighborhood Stabilization Program,” according to the Detroit Free Press. And money from that grant continued to flow to Woosley’s company even after he took over MSHDA.

It’s about time that an ex-Snyder official was investigated for corruption. Woosley is only one of the many current and former Snyder officials that have been involved in a Snyder Scandal.

When Woosley resigned in disgrace, Snyder’s spokesperson said, “The Governor appreciates all that Scott Woosley has done to further Michigan’s comeback.”

I wonder if that statement will hold true if the fed’s legal hammer drops on this situation. Gov. Snyder has done little to stem corruption and abuse in his administration and it’s about time someone was held accountable.

Much like the state’s Aramark contract, it will be interesting to see what Gov. Snyder knew and when he knew it.