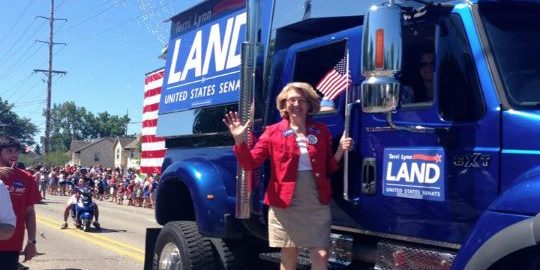 In case you haven’t seen it yet (it’s pretty hard to miss), this is Terri Lynn Land’s campaign truck: 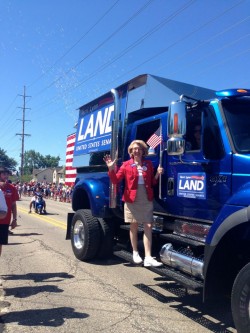 For someone who’s been dodging debates and questions from the media, officially winning the title of “The Invisible Senate Candidate,” you’d think she’d want to avoid such an ostentatious display of her presence everywhere she goes.

Honestly, unless Terri is planning to join the Monster Jam tour, start a trucking company, or try to land her car as the Optimus Prime truck in the next Transformers movie, then she has no need for that gas-guzzler.

On her own website one of her top issues is “Energy Policy” and her number one solution to ensure Michigan maintains abundant supplies of energy is to “Respect the Environment.”

Burning one gallon of gas spews 24 pounds of carbon dioxide and other toxic, global-warming-inducing gases into the air. When Terri drove her truck to Mackinaw City for her campaign tour four weeks ago, she blasted over 1,300 pounds of pollution into the atmosphere during that one trip alone. That’s five times more pollution than I would emit driving my Chevy to the same place. Doesn’t seem very respectful of the environment to me.

That pollution adds up.

Those crazy floods and extreme weather we’ve been experiencing over the last couple weeks? That’s a result of global warming. And if we don’t do something about it, it’s only going to get worse.

Terri Lynn Land has been touting her obscene truck and support of the Keystone XL pipeline as her “solution” to maintaining Michigan’s energy reliability. But what about electric vehicles, or increasing fuel efficiency of cars and trucks, or investing in renewable energy like wind and solar? It would be nice to know her position on solutions that actually respect our environment.

I won’t hold my breath on getting an answer.