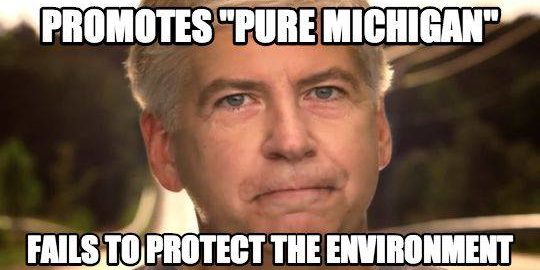 At the risk of sounding like a spoiled kid who just wants to have their water and drink it too, I have to say that Governor Synder couldn’t have done much worse on the environment if he’d tried…unless, that is, you’re a hopeless optimist who prefers to see your glass as being “Half Not Deadly.”

The scorecard issued Snyder a failing grade for his environmental record, based on the actions he took (or failed to take) on 14 different bills, neglecting to act in the best interest of Michigan or its environment 12 out of 14 times. That’s nearly a 90% rate of failure (rounding up to the nearest calamity). It’s hard to see these results as anything but negative and shameful—and, other than possibly viewing these figures upside-down, turning a 90% rate of failure into an impressive 06% rate of failure, I can’t see any imaginable way to defend this kind of blatant neglect and disregard for the health of a great state, literally defined by its Great Lakes!

One area in particular where Snyder received negative marks was for allowing coal ash to be utilized in agriculture as a mixture with fertilizer and on roads. Even a most basic and elementary look at the environmental damages caused by coal ash should be of great concern for anybody—but this lack of concern is especially despicable for the Governor of the state, who has it within his power to implement safeguards and protections against such poisonous practices.

In addition to removing protections from critical sand dunes and giving tax breaks to oil and gas companies, the scorecard also pointed out Snyder’s failure to advance any of the safeguards outlined in the 2013 Water Protection Agenda including measures that would hold oil and gas companies accountable for their irresponsible actions). In fact, it was reported that, under Snyder’s “leadership,” the Michigan Economic Development Corporation worked behind the scenes to lobby the Michigan Department of Environmental Quality, in an effort to allow Severstal Dearborn the ability to release higher levels of pollutants and avoid air quality regulations.

It’s hard to imagine this kind of careless inaction and indifference on matters of such gravity, or the audacity of a Governor who defends an administration which is little more than a pro-pollution lobby. Well, you don’t have to imagine any of that, because Governor Snyder’s scorecard speaks for itself, and it will make things very clear for anybody who may have had doubts.

If you needed any more reason to be dissatisfied, if not outright disgusted, with Governor Snyder’s warped priorities (remembering his billion dollar cut to education and his tax on seniors’ retirement income) you now have it. Snyder has not only opposed real protections and safeguards for our water and communities—he’s actually gone out of his way to actively dismantle Michigan’s existing protections and safeguards.