Yet Another Chapter in the War on Women 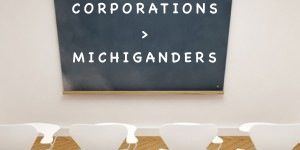 I didn’t imagine when I started working at Progress Michigan last year that I’d be sitting down every week to write my weekly blog and end up more often than not chronicling the attacks on women’s freedom and reproductive rights that should have ended with the women’s movement in 1960s.

I hope there will come a day when women have the freedom to make their own choices about what to do with their bodies without constant obstruction by right-wing, anti-choice extremists. But alas, that day is not today.

The newest addition to the list of involves one of the usual suspects, Governor Snyder, who has been an active participant in the War on Women. He recently made a campaign stop at Autocam, a manufacturing company in West Michigan. While touting the success of the company, he made no mention of the fact that Autocam has been fighting against women’s right to health care and considered the recent U.S. Supreme Court Hobby Lobby decision a victory.

In case you’ve been living under a rock for the last couple weeks and haven’t heard, the Supreme Court decided to allow Hobby Lobby, and other wealthy corporations, to refuse to cover birth control for female employees because of their self-professed religious objections. That’s right – now corporations have a greater right to exercise their religious freedom than you do.

And our governor seemingly has no qualms with that decision, evidenced by his visit to Autocam where he even said, “…the best part is that by being here today, we’re making a statement that we’re not done, that we’re going to continue on this path of success.”

Apparently for Snyder, the path to success involves allowing corporations to shove their supposed religious beliefs down the throats of their employees and deny female workers’ right to basic health care.

I guess we’ll see if this keeps up. Who knows, maybe the governor’s next stop will be Eden Foods, which would, sadly, not be surprising. If that is the case, you can bet I’ll be here blogging about it. Stay tuned.