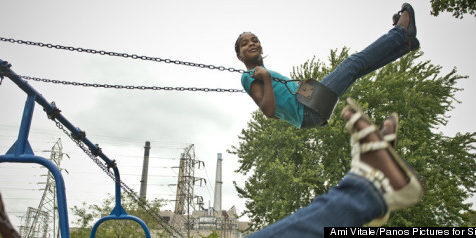 A landmark report came out recently from a group of over 300 climate experts warning that we are on the brink of climate change catastrophe, and unless we take immediate steps to reduce carbon pollution, we can rest assured that future generations will be stuck with a planet that is largely uninhabitable.

This is an urgent problem and every elected official in Michigan should be doing what he or she can to put a stop to it – unless you’re Governor Rick Snyder, apparently.

It was discovered over the weekend that Snyder’s business-promoting agency, the Michigan Economic Development Corp., worked for months with Severstal steel plant, one of the state’s worst air polluters, as the company lobbied the Michigan Department of Environmental Quality for permission to release higher levels of pollutants and avoid air quality regulations.

Gov. Snyder likes to talk about how governors are leading the way to a better future for the country. He even believes GOP governors are the front-runners for the next presidency. So why not show that level of leadership and tackle the issue of climate change head-on?

Governor Snyder has a choice: He can protect our health, our Great Lakes, and future generations from the devastating effects of climate change. Or he can protect the interests of corporate polluters, and he chose the latter.

This isn’t surprising considering the governor’s track record – last month we found out that he used the state budget to protect a $41 million dollar furniture contract that benefitted his cousin. We also know that Snyder gave a $1.8 billion tax giveaway to corporations at the expense of working families, and our neighborhood schools and roads.

Gov. Snyder sold himself to Michigan as a no-nonsense businessman who would move us beyond partisan gridlock and make Michigan “the Comeback State.” What he didn’t mention was that those making a comeback would be his relatives, his funders, corporate polluters, and the DeVoses.