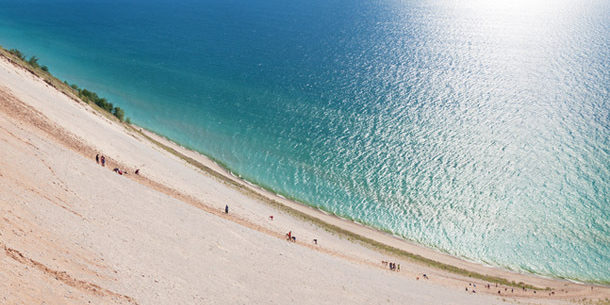 Today is Earth Day, the 44th anniversary of the birth of the environmental movement. Before the movement began, fossil fuel industries and governments could spew into the air, pump into the water, and dump onto the ground virtually any type of pollution with no consequence. The first Earth Day in 1970 led to the creation of the United States Environmental Protection Agency and the passage of the Clean Air, Clean Water, and Endangered Species Acts (thanks to the hard work of Michigan’s own Congressman John Dingell).

We’ve come a long way since then. In 1995 the Michigan Department of Environmental Quality was created to protect and preserve Michigan’s Great Lakes and environment. In 2008, the Clean, Renewable and Efficient Energy Act was passed, establishing a statewide renewable energy standard that helped to build Michigan’s growing clean energy economy.

We’ve made decades of progress, but we must continue moving forward and focus on the future so that we all benefit.

Power plant pollution standards have not been updated since 1982, giving power plants a free pass to dump billions of pounds of toxic chemicals directly into our water every day. Utility companies are set to meet the state’s 10 percent renewable energy goal by 2015 and unless our legislature increases it, thousands of jobs in the clean energy sector will be lost, along with all the progress utilities have made in transitioning to clean energy. Funding for the Michigan Department of Environmental Quality general fund appropriations has been slashed by $27 million in the past decade, leaving our air and water vulnerable to dangerous contamination.

According to a report by the Intergovernmental Panel on Climate Change, decades of foot-dragging by political leaders has propelled humanity into a critical situation, with climate change causing greenhouse emissions rising faster than ever.

Year after year we’re seeing the disastrous effects of climate change in Michigan.

In 2012, we lost 90 percent of our cherry crops, a $60 million dollar industry in our state, because of climate change. Our Great Lakes are drying up. Last year, Lake Michigan and Huron hit their lowest water levels in recorded history, which delivered a substantial blow to Michigan’s multi billion dollar shipping and tourism industries. And as every Michigander can recall, this winter was one of the worst in decades. As the snow finally melts, cities across Michigan are experiencing major flooding and a predicted slew of other problems as temperatures rise.

You’d think with all of the damaging extreme weather our state is experiencing as a result of climate change, our legislature would be doing all they could to put a stop to it. But that’s not the case, especially in an election year when politicians like Governor Snyder are more concerned about appeasing their corporate donors than protecting our health and our economy. Worse still, Attorney General Bill Schuette is even suing to stop, yes stop, the cleanup of the Chesapeake Bay out of fear that the Great Lakes may get a clean up too. Worse yet, not one Republican has mentioned Earth Day in Congress since 2010.

The longer our elected leaders wait to implement critical steps to put a stop to climate change, the more devastating the effects will be on our water, our health, and our communities. This Earth Day, let’s remind our legislators that we only have one planet and the time to act was yesterday.