The Bill of the People 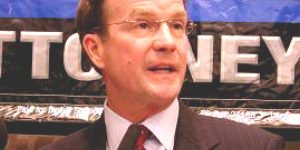 Bill Schuette likes to claim he defends the will of the people in his role as attorney general. He used this phrase when explaining why he defended Michigan’s ban on marriage equality. The people voted, after all. Blatant bigotry aside, the argument that Schuette is blindly following the collective voice of the people just doesn’t hold up.

In 2008, Michigan voters approved Proposal 1, a voter-initiated statute allowing for the use of medical marijuana. Not only was it approved, it passed with an overwhelming margin. So one would assume that Bill Schuette would defend the statute with the full force of his office — but you’d be wrong.

Since its passage and implementation, Schuette has led the charge against the law – issuing an opinion that undermined the vote and lobbying the legislature to make changes to the law (even though he now says that LBGT issues should be left to the legislature, despite his vendetta against equality in the courts)

But it doesn’t stop with Proposal 1. Schuette has used his office to conduct personal crusades instead of acting as the lawyer for all of Michigan’s citizens. You can read more about Schuette’s record here.