Progress Michigan Executive Director Statement on Republican Claims of 200,000 New Jobs Due to Right to Work 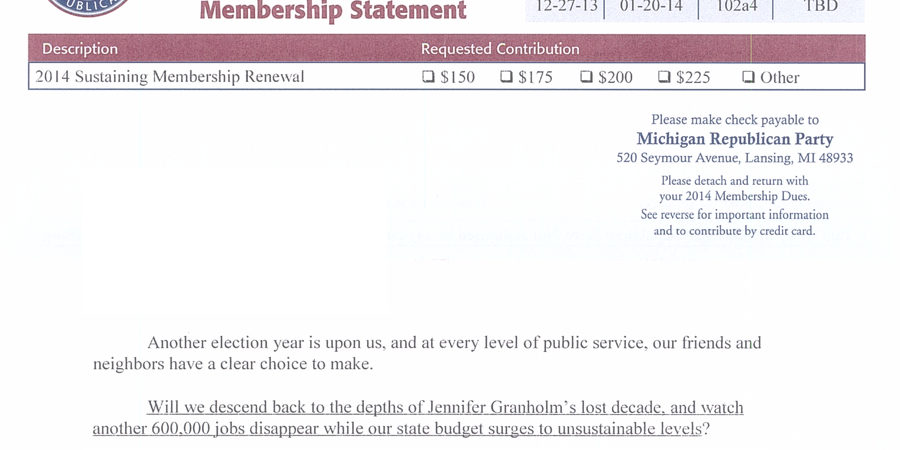 Progress Michigan Executive Director Statement on Republican Claims of 200,000 New Jobs Due to Right to Work

LANSING – Last month, the Michigan Republican Party mailed a fundraising letter urging supporters to donate and keep the conservative agenda moving forward in 2014, citing Right to Work as an example and claiming it has already “helped bring nearly 200,000 jobs back to Michigan.” But when asked point blank how many jobs Right to Work has created, Gov. Rick Snyder and MEDC CEO Mike Finney demurred, saying it’s impossible to know but they’ve heard positive “anecdotal feedback.”

“Gov. Snyder sold himself to voters as a data-driven, moderate accountant who could get Michigan on the right track. His inability to track the impact of a policy he ‘championed’– Right to Work – is as worrisome as it is questionable,” said Lonnie Scott, Executive Director of Progress Michigan. “If the Michigan Republican Party knows how many jobs have been created by Right to Work, Gov. Snyder and the Michigan Economic Development Corporation should make that data publicly available. And if Gov. Snyder’s party is making indefensible claims about his signature achievement as a tool for fundraising, he should correct the record immediately.”

Republicans Claims 200,000 New Jobs Due to Right to Work

In 2012, Gov. Snyder and Michigan Republicans rammed through Right to Work legislation with zero public input or debate, claiming it would help create “more and better jobs” while making Michigan more business friendly. It’s been over a year, but when asked how many jobs Right to Work has created both Gov. Snyder and MEDC CEO Mike Finney demurred, saying they’ve heard positive “anecdotal feedback.”