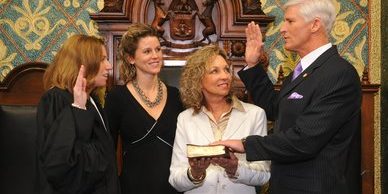 After getting trounced at the polls in 2013, Republicans commissioned an autopsy report to figure out why and recommend strategies that could help lead them out of the political wilderness. As you’d expect, the report recommended expanding the Republican Party’s tent by “softening” their stance on immigration reform and supporting LGBT rights.

Almost a year later and the Republican Party’s tent isn’t any bigger – and it’s not for lack of opportunities. Last year, Dave Agema – one of Michigan’s two Republican National Committeemen – made headlines when he claimed LGBT individuals lead a “filthy” lifestyle and account for more than half the murders in large cities.

While the public outcry was swift, Gov. Snyder and Michigan Republicans refused to call for Dave Agema’s resignation, insisting his views didn’t represent the Republican Party. A few weeks later, Dave Agema’s amendment to define marriage as between one man and one woman was overwhelmingly approved by the Republican National Committee, thereby making it party policy. Just this week, Dave Agema praised Russia’s anti-LGBT propaganda law, calling it “common sense.”

And if defining marriage as between one man and one woman isn’t clear enough, former State Rep. Jack Hoogendyk lambasted the unfair persecution of Dave Agema, calling him “a prophet.”

A prophet? You’d think conservatives who justify their bigoted opposition to marriage equality by citing the Bible would be more well versed in the Good Book, but these are the same folks who think Jesus would support cutting food-stamps.

If Republicans want to emerge from the political wilderness anytime soon, then they’d better remove folks like Dave Agema from leadership positions. But don’t take our word for it, the Book of Matthew (King James Version) verse 7:15-20 says it best:

Beware of false prophets, which come to you in sheep’s clothing, but inwardly they are ravening wolves.