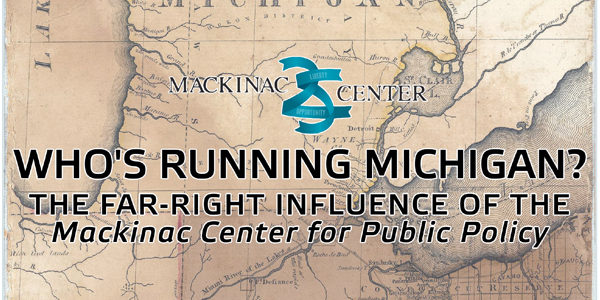 LANSING – Today, Progress Michigan and the Center for Media and Democracy released a report delving into how The Mackinac Center for Public Policy and has been influencing politics and public policy in Michigan using ALEC model bills that promote a right-wing agenda. Progress Michigan uncovered that despite The Mackinac Center’s 501c(3) nonprofit status, the organization made donations to the Michigan Republican Party and the Livingston County Republican Committee, which violates the rules for a 501c(3).  You can see the report HERE.

“The Mackinac Center can no longer hide behind the claim of being a non-partisan think tank,” said Lonnie Scott, executive director of Progress Michigan. “Not only are they lobbying on behalf of legislation that would benefit big corporations, they’re blatantly making donations to political parties on behalf of the organization. It’s time they wear their stripes on their sleeve and own up to what the rest of us already know — they’re a partisan think tank that cares more about big business than people.”

The report details how the Mackinac Center claims to be an independent, non-partisan think tank, when in reality they are members of the State Policy Network, a national Koch-funded, ALEC-allied network of organizations. State Policy Network member groups advocate for a national agenda driven by out-of-state corporate actors. Be it the economy, environment, education, workers’ rights or access to health care, State Policy Network member groups promote policies that are not only designed to fatten the bottom line of their corporate funders, but are consistently harmful to working families.

The Mackinac Center is also an active member of the American Legislative Exchange Council (ALEC), a corporate bill mill. Mackinac staffers have proposed numerous bills at ALEC task force meetings, and coordinated an agenda to get laws passed in the state of Michigan to benefit wealthy corporations and CEOs.

–Mackinac’s Slanted “News Service”- The Mackinac Center is also an affiliate of the Tea Party-linked Franklin Center, a consortium of conservative “news” outlets in over 40 states that are funded in part by the Koch brothers. Through the Michigan Capitol Confidential, the Mackinac Center pushes its right-wing agenda behind the mask of “journalism.”

“It’s time for the Mackinac Center to come clean about being a front group for ALEC,” continued Lonnie Scott. “The anti-middle class and anti-worker agenda they’re pushing has had disastrous effects throughout our state. It’s time we work together to rebuild the middle class and doing so means making sure the public knows the truth — that the Mackinac Center is not the non-partisan think tank they claim to be.”