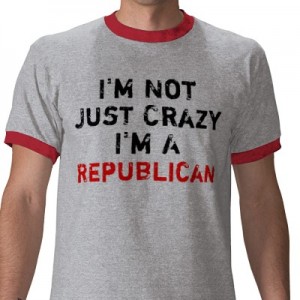 Welcome to the land of nonsensical decisions, where the tyranny of the minority is holding countless people hostage in a logistical standoff. The federal government shutdown has lasted one week, with neither side appearing to back down.

When do Republicans want to end this nonsense? Even they’re not sure.

This past week, one thing has been increasingly evident: the inmates are running the asylum. House Republicans are living in never never land, where childish temper tantrums reign and the proverbial line is drawn in the sand without a clear vision of an end game or what it will take to end legislative tyranny.

We’ve compiled a list of our top six examples of some of the craziest and outlandish things Republicans have done or said this past week.

1. At a World War II memorial in Washington, D.C., Congressman Randy Neugebauer (R-Texas) had the audacity to demand an apology from a park ranger because the memorial was closed. The park service has been allowing WWII vets who traveled from around the world to visit the memorial, but kept the park closed to other tourists. We should mention that Neugebauer was one of the votes along with other House Republicans in an attempt to sideline the Affordable Care Act.

2. As previously mentioned, they don’t have a clear vision of what they want, they just know they want the intangible and highly evasive “it.” This quote defines the Republican shutdown: Rep. Marlin Stutzman (R-Ind) told the Washington Examiner they’re [Republicans] are “not going to be disrespected. We have to get something out of this. And I don’t know what that even is.”

3. Rep. Tim Walberg (R-Michigan) is desperately trying to pin the responsibility of the government shutdown on President Obama. In an interview with Heritage Newspapers, he tried throw his spin on the issue, “This has become a political issue and they are trying to make people believe the House Republicans are causing the shutdown.” Lo and behold, this contradicts with the sad reality it IS the House Republicans stalling this process, and Rep. Walberg left a paper trail to prove it. In an inflammatory statement to Mlive  in 2010, claiming his victory meant President Obama needed to bend to the will of the GOP by shutting down the health care law: “If he doesn’t, he will shut government down.”

4. Republican Rep. Brenda Barton (R-Arizona) on her Facebook page compared President Obama to Hitler over national parks, referring to him as “De Fuhrer.” What’s even more alarming than her blatant disrespect for the leader of our country is the fact that she stood by her comparison. We have a comparison we could make about Rep. Barton. But we also have a level of professionalism and decorum we believe in and adhere to, something Rep. Barton obviously could care less about.

5. It’s a good thing Rep. Tom Massie (R-Kentucky) is happier at home than doing the job he was elected to complete, as he told Bloomberg Business Week. “The last thing I fear is going back and leading the same life,” said Massie. That’s too bad, Rep. Massie. A lot of us don’t like going to work. But we do it anyways, especially when thousands of workers, children and servicemen and women depend on our competency.

6. Rep. Renee Elmers (R- N.C.) voted to sideline the Affordable Care Act, and in turn played an intrical part in creating the federal government shutdown. While thousands of federal workers aren’t collecting a paycheck, Rep. Elmers still feels entitled to hers because “I need my paycheck, that’s the bottom line.” Rep. Elmers obviously doesn’t feel federal workers need their paychecks as badly as she does, even though her husband is a general surgeon.

There are enough votes in the House to produce a resolution to this foolish standoff and end the shutdown for good. But until Speaker of the House John Boehner is willing to show true leadership within his party, that vote is not happening any time soon.

And in the meantime, the families of fallen service members remain without death benefits, more than 7,000 children were ruthlessly kicked out of Head Start programs and were reinstated only thanks to a generous benefactor, and countless federal employees aren’t collecting a paycheck until Congress gets its act together.

If the delicate balance of our country’s security and prosperity, a looming collapse of the economy and defaulting on national loans or the needs of young children and compensating families of fallen soldiers dosen’t inspire you to do your job — then nothing will.

It’s time for Republican members of Congress to stop the political posturing and do their job, because Americans can’t – and shouldn’t have to – wait any longer.

Join our call for members of Congress to donate their paychecks to charity. If federal workers aren’t getting paid, neither should lawmakers.