We’re not an elected official 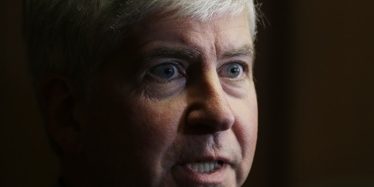 Last week on Off the Record, Chad Livengood suggested that plenty of groups, including ones like Progress Michigan, utilize the tax code to shield their donors just like the Governor Rick Snyder’s NERD Fund. He added, “It’s interesting that the governor — and maybe even the Michigan Republican Party — have not gone on the offensive and said, ‘Show me yours and I’ll show you mine.'”

Both Progress Michigan and the NERD fund are 501 C(4)s. That’s where the similarities stop. 501 C(4)s are generally civic-minded organizations that promote social welfare and justice. According to Wikipedia, “An organization is operated exclusively for the promotion of social welfare if it is primarily engaged in promoting the common good and general welfare of the people of the community.”

Progress Michigan whole-heartedly dedicates itself as a citizens’ watchdog group and holds lawmakers accountable. To put Governor Snyder’s NERD fund in the same ballpark is a stretch.

While we’d love to get into a nonsensical contest with the far-right, we don’t think our thousands of small-donors would stack up too well against Gov. Snyder’s moneyed-interests. We probably have more donors – and we appreciate each and every one of them – but they aren’t big donors. They’re working Michiganders trying to make ends meet with an average donation around $20. Since we preach transparency, here’s our filing with the IRS:

What Chad Livengood and others fail to recognize is that we’re not an elected official like Gov. Snyder or a political appointee like Kevyn Orr – whose decisions impact every single person in Michigan. We didn’t promise transparency when we ran for office and then break that promise; and we haven’t been busted eating crab cakes, privatizing city services, and getting paid an exorbitant amount of money – $200,000 – either.

Nope, we’re just Progress Michigan. And if Gov. Snyder and the far-right want a peek at our list, they’ll have to appoint us Emergency Manager first.