Gov. Rick Snyder recently spoke at a 40 under 40 event in Grand Rapids. He gave a speech to the up-and-comers in an effort to bestow his gubernatorial wisdom on the crowd.

“When I first became governor, people would come up and say, ‘be bold.’ And that’s something we should all focus on,” Snyder said. 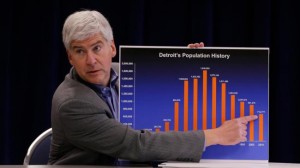 Let’s hit pause for a moment. Being bold means being defined, taking an unpopular stand on something because it’s right – not easy – and sticking to it.

Remember the recent media scrum where Snyder repeatedly skirted around the question of whether or not he supported equality for the LGBT community?

It’s obvious this governor doesn’t have a bold bone in his body. If he did, he would take a stand to protect the LGBT community.

And who can forget Snyder’s bold statement on how Right to Work was “very divisive” and not on his agenda? We all know how that turned out.

Back to Snyder’s speech:

“We’re a family, we’re a family of 10 million people,” he said. “It’s about creating winning-scenarios over a time period, where everyone can benefit together and everyone has opportunity together.”

Who exactly is benefitting from Snyder’s policies? It’s not working Michiganders. Under Snyder, the Earned Income Tax Credit was virtually eliminated and Michigan experienced the worst drop in median household income in the country.

Snyder went on to say we should be “Looking toward that bright future and doing it, not just for us, because we’re already successful in many respects, but for our kids and our kids’ kids.”

Speaking of kids, Snyder probably should have mentioned that the interests of big business are more important to him than the future generations of Michiganders. Thanks to Snyder, our school children helped pay for a $1.8 billion tax break for corporate CEOs.

And not only are K-12 kids being attacked by Snyder, but due to Snyder’s divestment in higher education, the cost of a college degree continues to rise.

One last note from the governor:

“Let’s encourage and empower diversity about how we can bring very different people together and create that winning environment where we can succeed together,” he said.

The governor has never been the best orator, but I think I know what he meant to say. He claims to value diversity and wants everyone to be successful.

However, like it was mentioned above, Snyder obviously doesn’t care about empowering “diversity” or creating a winning-environment for all Michiganders when there is state-sanctioned discrimination against LGBT residents and their families and he refuses to back equal pay for equal work for women.

Making speeches at cocktails parties is one thing. Making a positive difference in the lives of Michiganders is another thing. Michigan’s residents deserve more than lip service from Snyder.