What It Takes to Actually Be Immigrant-Friendly

Governor Rick Snyder talks tough when it comes to positive immigration reform and being an immigrant-friendly state, whether that’s at forums, in the news or via interviews. And, why wouldn’t he? As his strategist, Ania Bieciuk, noted at Tuesday’s Welcoming Michigan event, Michigan only stands to benefit from increased immigrant population. We were the only state to lose people over the last decade, with most of that resulting from urban flight. On the flip side, Asian and Latino communities in Michigan represent around $9 billion of purchasing power each. That’s cash we’d like to keep in our cities and towns. Any leader of an economically floundering state would be smart to get behind the rhetoric of immigrant-friendly communities. 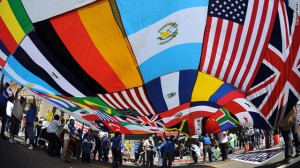 To be fair, Snyder has been an active supporter of the Welcoming Michigan initiative and of immigrant-friendly positive legislation in general. Back in spring, during the height of immigration reform in the news cycle, Snyder advocated comprehensive reform and floated reform-minded ideas such as an urban visa for those willing to stay and work in larger cities. He also lent his name to the March for Innovation this campaign. But, it’s going to take more than tough talk to position Michigan as a state that truly accepts and embraces immigrant communities.

One example of words turning into action is another leader who was present at Tuesday’s Welcoming Michigan event — State Representative Rashida Tlaib (D-Detroit). Tlaib followed through this past April with the introduction of Michigan House Bill 4617, which would establish an Office of Immigrant Integration — an action that would go a long way in serving and keeping the valuable immigrant population in Michigan. The bill is currently in committee.

Tlaib’s kind of solid action is exactly what Michigan needs in a leader, especially when it comes to grabbing the creative, economic and educational value that our immigrant neighbors offer our communities. These are values and characteristics that Michigan desperately needs. We’re excited to see Gov. Snyder throwing his weight behind these initiatives and look forward to his cooperative work in pushing them forward with other leaders, such as Representative Tlaib. This kind of bipartisan action leads to flourishing cities and a prosperous state.