Jase Bolger: “I would do that again” 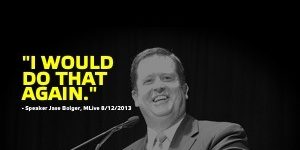 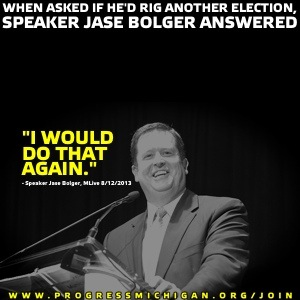 You have to admit, after a well-documented history of lying it’s refreshing to hear Speaker Jase Bolger finally tell the truth. When the BolgerGate revelations first came to light, Bolger slyly noted that technically electoral fraud isn’t illegal and he’d remain in power.

As William Forsyth, the Republican prosecutor, said at the time – “embarrassing.” Continuing that the ploy “was clearly intended to undermine the election and to perpetrate a ‘fraud’ on the electorate,” Forsyth added “as a Republican elected official, I am embarrassed and offended by what transpired.” Nonetheless, no charges were filed because – technically – Jase Bolger didn’t violate any laws.

“An indictment is not warranted as there has been no presentment of any articulable crime or unlawful wrongdoing as to any person or persons involved in such an inquiry, either in common law or statutory law.”

After news broke that believing in something doesn’t make it so, Jase thanked “all of those who stood by me during this time.” A year ago, Progress Michigan asked 110 House Republicans if they’d back Bolger and only one said yes. The few. The proud. The Bolger backer.

“I would do that again. The mistake was to focus on the competition, to focus on winning, instead of focusing on what’s right for voters and letting voters make that decision. We went one step too far in worrying about his opponent.”

The way he describes it you’d almost think his paycheck depends on winning, but this might be the most truthful thing Jase Bolger has ever said in public.

First, he would do it again. Second, he admits that defrauding voters in a quest for personal power and partisan gain is wrong. Third, he now realizes that voters should be able to make their own decisions. Finally, he’d do it again minus the part where he decides that democracy is for losers and rigs the election.

Folks universally agree that what Jase Bolger did was morally and ethically wrong and should be illegal, but that still doesn’t make it illegal. Voter fraud is almost non-existent but the penalties against it are severe. Electoral fraud is very real but the penalties against it are almost non-existent – and with the current “leadership” in Lansing that won’t change anytime soon.