Get Out of Jail Free Card 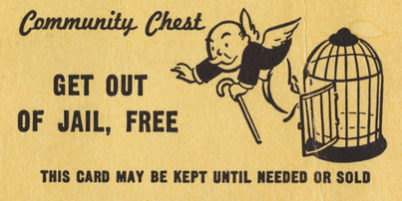 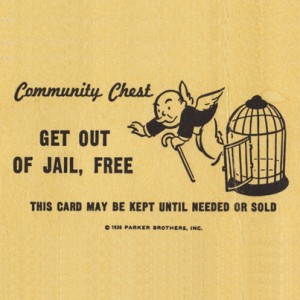 Well it should, but consider how much wealth Wall Street controls. At last count, six banking companies have assets equaling 60% of the United States GDP. That’s $8.99 trillion. A few billion here, a few billion there, and soon you’re talking about real money to these guys.

Fines alone are not enough to right the ship; banks and their CEOs must adhere to the same rules as everyone else. Banks can simply use part of their ill-gotten gains to pay the fine, and if they’ve budgeted wisely there might be a few hundred billion lying around from the bailout or QE 1, 2, and 3.

After it’s all said and done, CEOs collect a multi-million dollar bonus for a job well done and no one goes to jail. The Great Recession. Predatory lending and Citigroup housing fraud. LIBOR. Interest Rate Swap manipulation. European AND American energy price manipulation. Trillions of dollars worth of assets unfairly bought and sold for profit by Wall Street, and only a few hundred million in fines.

If the cost of doing business is a comparatively minor fine, then raising the price of aluminum world-wide for a handsome profit is an easy sell. But folks who would dare steal a toothbrush from Walmart get eight months in jail. And Wall Street’s time served for robbing every single one of us? Nothing. Nada. Zilch. Zero.

If only we could band together to form a sort of union to represent our interests – both as a body politic and economic interest – and right this wrong. Oh wait, we can. Help us hold large financial institutions accountable by signing our petition telling lawmakers that the law applies to everyone, not just the little guys.