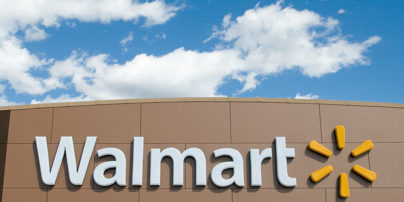 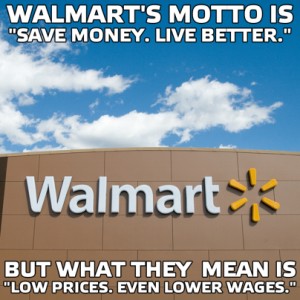 Yesterday, Walmart threatened to abandon D.C. if residents approved a living wage set at $12.50 an hour. Voters approved the living wage, and this morning Walmart announced they were scrapping plans for three new stores in D.C.

Why? Because low wages are the lynchpin of Walmart’s business strategy: low prices.

Walmart prides itself on having the lowest prices around. It’s what makes them competitive, profitable, and everywhere. Once you see the price, who cares why it’s so cheap or where it came from? It’s probably America’s devotion to capitalism that warranted Walmart’s beneficence, anyways.

But we know that’s not true. Walmart has the lowest prices around because they have the lowest wages around. In fact, Walmart employees earn 28% less than workers at similarly large retailers. Once Walmart sets up shop in your neighborhood, everyone’s wages start to go down:

As a result of this dynamic, average wages for retail workers were 10 percent lower, and their job-based health coverage rate was 5 percentage points less in an area than it would be if Walmart did not exist. The study concludes that in 2000, retail employees nationwide would have taken home $4.5 billion more in their total paycheck if Walmart had not been around.

In the end, taxpayers cover the difference while Walmart profits hand over fist:

Walmart likes to position itself as the friendly neighborhood superstore devoted to saving you money. When they come to your neighborhood, you’ll “Save Money. Live Better.”