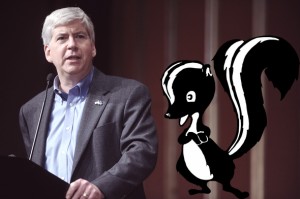 Yesterday, the Snyder administration said they’d be shelving their “Skunk Works” group, but left open the possibility that the “value schools” piece of it will live on. The father of “Skunk Works” and Mackinac Center cofounder Richard McLellan declared that while the group is dead, “value schools” are still very much alive.

And after claiming that Skunk Works “just freaks them [teachers, parents and students] out” and admitting that it’s “quite radical,” Richard McClellan cited the recent spate of public school funding emergencies (created by Republican politicians’ $1 billion education cut) to justify his plans for voucher-like “value schools”:

At this point, McLellan said he’s done with Skunk Works and with working on this particular concept. But with more schools like Pontiac, Buena Vista and Albion facing funding shortages, creative answers to educating children at a lower cost will need to be explored, he contended.

Now, some schools are getting more funding than they were at some unspecified past date. But adjusting for inflation (economists call them “real dollars”), it’s clear that Michigan’s public school system isn’t a priority for Lansing politicians:

Has your Grandma ever told you we pay a dollar for what she used to get for a dime? Nowadays, today’s dollar holds the same value as Grandma’s dime. But while the costs of living and teaching have increased, wages and education funding have not.

Think about it: the prices of food, shelter and rent have increased, but we’re still getting the same pay in nominal dollars as we did in ’73. If the materials associated with managing a school cost more as well as employee wages (again, because wages should rise with inflation), then funding should increase as well.

But this hasn’t happened. Americans have experienced alarmingly stagnant wages for the last 40 years. Meanwhile, large corporations profit hand over fist and pay a lower tax rate than they did in 1924. Capital gains are taxed at their lowest rate since before FDR was in office.

We refer to that era as the “Gilded Age.” Looking at the data, we’re entering a second gilded age. An age where, if you ask right-wing extremists, the free market is best equipped to guide society and private companies are best suited to fulfilling traditional government functions… like writing our laws, managing our public schools and incarcerating our citizens. All for a tidy profit. At this rate, kids will be attending a K12 Inc school while GEO manages our justice system and Chik-Fil-A administers marriages.

The only problem is, Michigan’s middle-class families have rejected this agenda again and again. We’re proud to stand with working men and women who understand that there’s nothing pro-education about Rick Snyder’s “Skunk Works” and “value schools” agenda. It’s time for Lansing politicians to get their priorities straight, stop attacking educators, and once again invest in education.