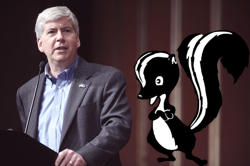 Aside from being an obvious act of contrition, the move was meant to remove any pretense of secrecy from the “Skunk Works” project by bringing it out into the open. They’ve even rebranded it as a “technology initiative” that will leverage recent advances to create “value schools.” Michigan Capitol Confidential, a project of the Mackinac Center, recently defended the effort by arguing that competition between schools would improve performance and give parents – and their children – more options. However, there’s one major economic flaw with this theory: the demand for education is inelastic while the supply – because the Michigan Legislature lifted the cap on charter schools – is elastic.

And because demand for education isn’t elastic the traditional assumptions don’t apply; namely, that competition in the education system will create better results. In fact, it incentivizes the quest for more pupils and, therefore, more profit. The actual performance of Michigan’s for-profit education system supports this conclusion:

In theory, these schools were going to compete for students based on the quality of education they provided.

But Margaret Trimer Hartley says the reality is a little different.

And in the absence of standards, Arrellano says the poor-performing charter school operators are actually expanding more quickly than the high performing ones. And since these schools still get their funding from the state, taxpayers have been subsidizing the growth of these substandard schools.

Essentially, the $5,000 debit card being proposed by the Skunk Works group would create artificial demand for K12 Inc’s for-profit charter school supply, thereby incentivizing slick advertising over a quality education. In reality, Skunk Works is nothing more than a deliberate attempt at privatizing Michigan’s education system so Gov. Snyder and the Mackinac Center’s corporate backers can make an extra buck at the expense of our children’s education.

The Mackinac Center likes to wrap their corporate-sponsored policies in pseudo-economic theories that give them the veneer of legitimacy, all the while ignoring the very theories they proclaim to espouse. Skunk Works would create the wrong incentives for our schools, give us a worse education system, and it still stinks. Don’t let Michigan’s education system become another failed experiment in privatization: Call on Gov. Snyder to release all documents related to this project – including staff time and emails exchanged during normal business hours.