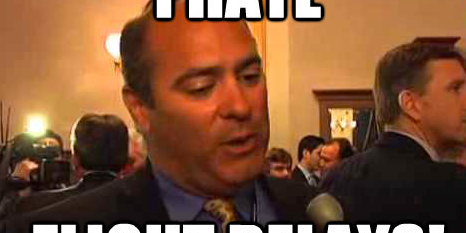 I have no idea why Rep. Anthony Forlini decided he would write a column about the regular (rich) Americans who were affected by flight delays because of sequestration. But his column in today’s Detroit News missed the mark in more ways than one.

Rep. Forlini decided he would try to thread the needle by simultaneously calling sequestration “unconscionable” and “small cuts.” But despite his repeated contention that the impacts of sequestration could have been avoided with amorphous cuts to “bureaucratic elite” and “administration,” he never explains what that actually means.

In fact, the air traffic controller furloughs were not carefully planned by the Obama Administration. Sequestration cuts were made evenly across the board to nearly every part of government, and “shared sacrifice” for everyone (even rich people) is what Republicans say is their desired end result of European-style austerity. But austerity is economics as religion, a conviction that Americans have lived off the fattened calf of government spending for too long, and now must find salvation through painful spending cuts. This belief cannot be shaken by math.

Salaries make up 70 percent of the FAA’s operations budget, making them the most obvious target for cuts as the “bureaucratic elite” tried to find a way to deal with sequestration. And as I pointed out last week, the FAA administrator Michael Huerta testified on the coming effects of air traffic controller furloughs weeks before they started, and Transportation Secretary Ray LaHood warned of them in February. No Obama plot there. Of course, no one who is arguing that the flight delays were a political ploy has produced any evidence backing that up.

If Rep. Forlini did a little research into the federal budget, he would see that there’s very little to cut outside of what he helpfully ruled off-limits. Defense makes up 19 percent; Social Security, health care programs, and the safety net make up a combined 55 percent. Interest on the debt makes up 6 percent, and the remaining 20 percent covers federal retirement and veterans’ benefits, transportation infrastructure, education and scientific research.

Of course, Washington could have taken Rick Snyder’s advice and used Michigan as a model. But I suspect if Congress and the President had raised taxes on seniors and implemented harsh cuts to education and the safety net, Lansing Republicans wouldn’t like that very much.

Hopefully Rep. Forlini stays intellectually consistent and continues to rail against the parts of sequestration still in place that are driving people into homelessness and cutting off cancer treatments. But now that the horror of sitting in an airport for a few extra minutes has been avoided, I doubt it.